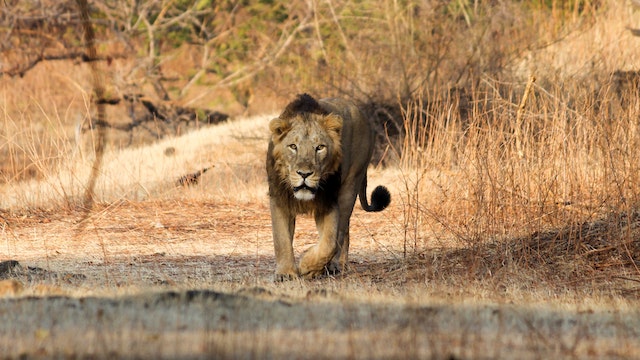 Early-morning sunlight filters through the leaves and shadows skittle through the undergrowth. Suddenly, the silence is broken by the high-pitched alarm call of a spotted deer: danger is at hand. Somewhere out there the king of the jungle is hunting.

This is Gir National Park, the last home of the Asiatic lion, and Gujarat's most applauded wildlife park. Coming here on a safari is an unforgettable experience. The best time to visit is December to April.

The park was set up in 1965, and a 259-sq-km core area was declared a national park in 1975. Since the late 1960s, lion numbers have increased from under 200 to over 650 (not all of these lions live within the park). The sanctuary’s 37 other mammal species, most of which have also increased in numbers, include dainty chitals (spotted deer), sambars (large deer), nilgais (large antelopes), chousinghas (four-horned antelopes), chinkaras (gazelles), crocodiles and rarely seen leopards. The park is a great destination for birders, too, with more than 300 species, most of them resident.

While the wildlife has been lucky, more than half the sanctuary’s human community of distinctively dressed maldhari (herders) have been resettled elsewhere, ostensibly because their cattle and buffalo were competing for food resources with the antelopes, deer and gazelles while also being preyed upon by the lions and leopards. About 1000 people still live in the park, however, and their livestock accounts for about a quarter of the lions’ diet.