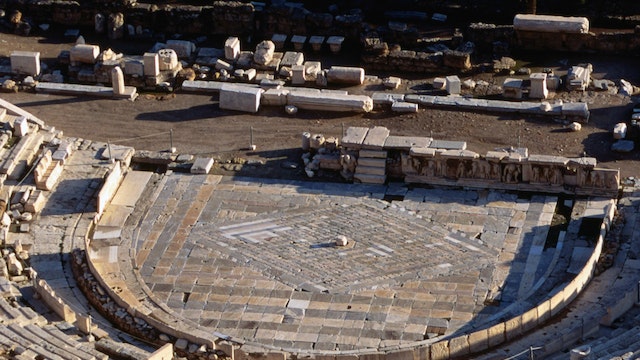 The tyrant Peisistratos introduced the annual Festival of the Great Dionysia during the 6th century BC, and held it in the world's first theatre, on the south slope of the Acropolis. The original theatre on this site was a timber structure, and masses of people attended the contests, where men clad in goatskins sang and danced, followed by feasting and revelry. Drama as we know it dates to these contests.

At one of the contests, Thespis left the ensemble and took centre stage for a solo performance, an act considered to be the first true dramatic performance – hence the term 'thespian'.

During the golden age in the 5th century BC, the annual festival was one of the state's major events. Politicians sponsored dramas by writers such as Aeschylus, Sophocles and Euripides, with some light relief provided by the bawdy comedies of Aristophanes. People came from all over Attica, with their expenses met by the state.

The theatre was reconstructed in stone and marble by Lycurgus between 342 BC and 326 BC, with a seating capacity of 17,000 spread over 64 tiers, of which about 20 survive. Apart from the front row, the seats were built of Piraeus limestone and occupied by ordinary citizens, with women confined to the back rows. The front row's 67 Pentelic marble thrones were reserved for festival officials and important priests. The grandest one – in the centre, with lion-paw armrests – was reserved for the Priest of Dionysos, who sat shaded from the sun under a canopy.

In Roman times, the theatre was used for state events and performances.

Reliefs at the rear of the stage depicted the exploits of Dionysos, and statues of hefty sileni stood here too. Sileni were worshippers of the mythical Silenus, the debauched father of the satyrs, whose favourite pastime was charging up mountains with his oversized phallus in lecherous pursuit of nymphs. The sileni are now in a sheltered area near the ticket booth for protection from the weather.