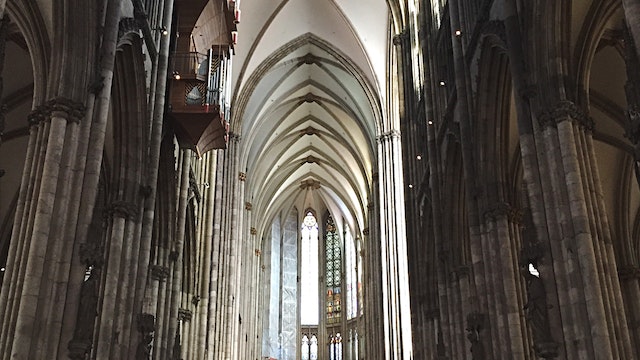 Cologne’s geographical and spiritual heart – and its single-biggest tourist draw – is the magnificent Kölner Dom. With its soaring twin spires, this is the Mt Everest of cathedrals, jam-packed with art and treasures. For an exercise fix, climb the 533 steps up the Dom’s south tower to the base of the steeple that dwarfed all buildings in Europe until Gustave Eiffel built a certain tower in Paris. The Domforum visitor centre is a good source of info and tickets.

The Dom is Germany’s largest cathedral and must be circled from the outside to truly appreciate its dimensions. Note how its lacy spires and flying buttresses create a sensation of lightness and fragility despite its mass and height.

This feeling of airiness continues inside, where a phalanx of pillars and arches supports the lofty nave. Soft light filters through the medieval stained-glass windows, as well as a much-lauded recent window by contemporary artist Gerhard Richter in the right transept. A kaleidoscope of 11,500 squares in 72 colours, Richter’s abstract design has been called a ‘symphony of light’; in the afternoon especially, when the sun hits it just so, it’s easy to understand why.

The pièce de résistance among the cathedral’s bevy of treasures is the Shrine of the Three Kings behind the main altar, a richly bejewelled and gilded sarcophagus said to hold the remains of the kings who followed the star to the stable in Bethlehem where Jesus was born. The bones were spirited out of Milan in 1164 as spoils of war by Emperor Barbarossa’s chancellor and instantly turned Cologne into a major pilgrimage site.

Other highlights include the Gero Crucifix (970), notable for its monumental size and an emotional intensity rarely achieved in those early medieval days; the choir stalls from 1310, richly carved from oak; and the altar painting (c 1450) by Cologne artist Stephan Lochner.

During your climb up to the 95m-high viewing platform on the south tower, take a breather and admire the 24-tonne Peter Bell (1923), the largest free-swinging working bell in the world.

To get more out of your visit, invest €1 in the information pamphlet or join a guided tour.