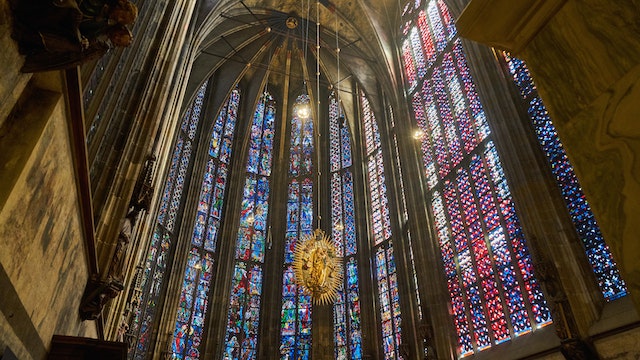 It’s impossible to overestimate the significance of Aachen’s magnificent cathedral. The burial place of Charlemagne, it’s where more than 30 German kings were crowned and where pilgrims have flocked since the 12th century. Before entering the church, stop by Dom Information for info and tickets for tours and the cathedral treasury. English tours run daily at 2pm.

The oldest and most impressive section is Charlemagne’s palace chapel, the Pfalzkapelle, an outstanding example of Carolingian architecture. Completed in 800, the year of the emperor’s coronation, it’s an octagonal dome encircled by a 16-sided ambulatory supported by antique Italian pillars. The colossal brass chandelier was a gift from Emperor Friedrich Barbarossa, during whose reign Charlemagne was canonised in 1165.

Pilgrims have poured into town ever since that time, drawn as much by the cult surrounding Charlemagne as by its prized relics: Christ’s loincloth from when he was crucified, Mary’s cloak, the cloth that John the Baptist's decapitated head was wrapped in, and swaddling clothes from when Jesus was an infant. These are displayed once every seven years (next in 2021) and draw 100,000 or more of the faithful.

To accommodate these regular floods of visitors, a Gothic choir was docked to the chapel in 1414 and filled with such treasures as the Pala d’oro – a gold-plated altar-front depicting Christ’s Passion – and the jewel-encrusted gilded copper pulpit, both fashioned in the 11th century. At the far end is the gilded shrine of Charlemagne that has held the emperor’s remains since 1215. In front, the equally fanciful shrine of St Mary shelters the four above-mentioned relics.

Unless you join a guided tour, you'll barely get a glimpse of the white marble of Charlemagne’s imperial throne in the upstairs gallery. Reached via six steps – just like King Solomon’s throne – it served as the coronation throne of 30 German kings between 936 and 1531.