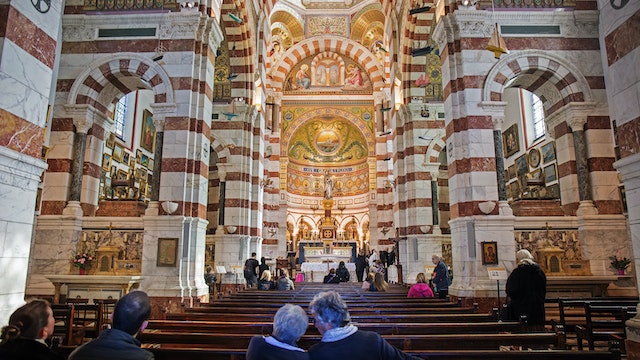 Occupying Marseille’s highest point, La Garde (154m), this opulent 19th-century Romano-Byzantine basilica is Marseille's most-visited icon. Built on the foundations of a 16th-century fort, which was itself an enlargement of a 13th-century chapel, the basilica is ornamented with coloured marble, superb Byzantine-style mosaics, and murals depicting ships sailing under the protection of La Bonne Mère (The Good Mother). The campanile supports a 9.7m-tall gilded statue of said Mother on a 12m-high pedestal, and the hilltop gives 360-degree panoramas of the city.

The basilica is a steep 1km walk from the Vieux Port; alternatively, take bus 60 or the tourist train.