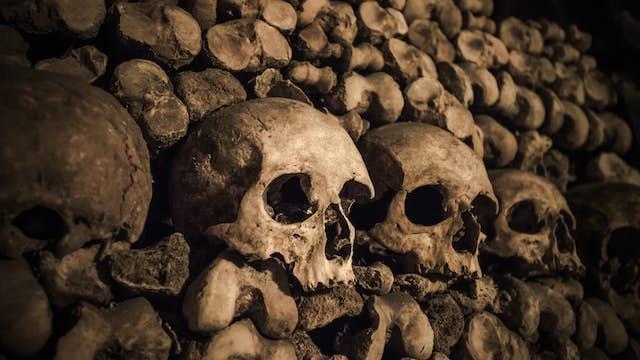 It’s gruesome, ghoulish and downright spooky, but it never fails to captivate visitors. In 1785, the subterranean tunnels of an abandoned quarry were upcycled as storage rooms for the exhumed bones of corpses that could no longer fit in the city's overcrowded cemeteries—now it's one of Paris’ most visited sights.

As the cemeteries became a public health concern, officials decided to move their contents to a site that was, at that time, outside the capital. The first evacuations happened from 1785 to 1787, from the Saints-Innocents cemetery, a site that had been in use since the Middle Ages and closed in 1780. At first, the human remains were simply piled into the quarry. However, before opening to the public in 1809, there was a decorative restoration of the ossuary. By 1810 the skull- and bone-lined catacombs—resting place of millions of anonymous Parisians—had been officially born.

Les Catacombes refers to the part of underground quarry that became the publicly accessible ossuary. However, the term catacombs is often used colloquially to refer to the more vast underground network of tunnels under Paris. These underground tunnels have remained a storied part of Parisian history: during WWII the Resistance held meetings there. Today, at night, thrill-seeking cataphiles roam the tunnels illegally.

In a visit to the official site, visitors will cover 1.5 km (about 1 mile) of the underground tunnels on an hour-long visit. The route through Les Catacombes begins at its spacious 2018-opened entrance av du Colonel Rol-Tanguy. Walk down 131 spiral steps to reach the ossuary itself, with a mind-boggling amount of bones and skulls of millions of Parisians neatly packed along the walls. The exit is up 112 steps via a minimalist all-white 'transition space' with a gift shop at 21bis av René Coty, 14e.

The surface is uneven and can be slippery—sturdy shoes are essential. It's not suitable for young children. People with claustrophobia may experience some anxiety in the confined environment. Also note that it is not wheelchair accessible—there's no lift and no ramp, only stairs. The temperature remains at a cool 14°C (57°F).

A maximum of 200 people are allowed in the tunnels at a time and queues can be huge—when the queue extends beyond a 20-minute wait, you'll be handed a coupon with a return entry time later that day. Last entry is at 7.30pm.

Renting an audioguide greatly enhances the experience; 90-minute guided tours in English take place at 1pm on Thursday. Online bookings are pricier but include an audioguide and guarantee a timeslot, whereas standing in the queue does not, as online ticket holders have priority.

Bag searches are carried out to prevent visitors from taking bones.