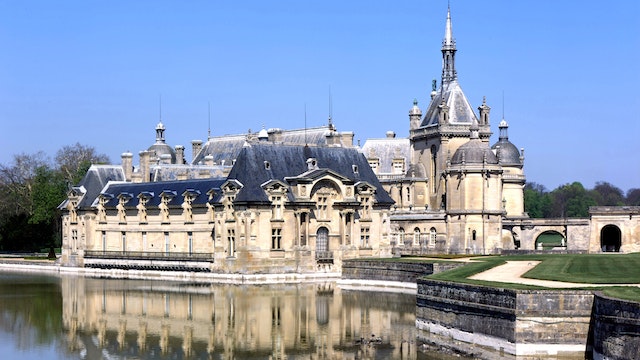 A storybook vision amid an artificial lake and magnificent gardens, the Château de Chantilly contains a superb collection of paintings within the Musée Condé.

Left shambolic after the Revolution, the restored château consists of the attached Petit and Grand Châteaux, entered through the same vestibule. The estate’s Grandes Écuries (Grand Stables) are just to the west.

The Petit Château, containing the Appartements des Princes (Princes’ Suites), was built around 1560 for Anne de Montmorency (1492–1567), who served six French kings as connétable (high constable), diplomat and warrior, and died doing battle with Protestants in the Counter-Reformation. The highlight here is the Cabinet des Livres, a repository of 700 manuscripts and more than 30,000 volumes, including a Gutenberg Bible and a facsimile of the Très Riches Heures du Duc de Berry, an illuminated manuscript dating from the 15th century that illustrates the calendar year for both the peasantry and the nobility. The chapel, to the left as you walk into the vestibule, has woodwork and stained-glass windows dating from the mid-16th century.

The adjoining Renaissance-style Grand Château, completely demolished during the Revolution, was rebuilt by the Duke of Aumale, son of King Louis-Philippe, from 1875 to 1885. It contains the Musée Condé, a series of 19th-century rooms adorned with paintings and sculptures haphazardly arranged according to the whims of the duke – he donated the château to the Institut de France on the condition the exhibits were not reorganised and would remain open to the public. The most remarkable works, hidden in the Sanctuaire (Sanctuary), include paintings by Filippino Lippi, Jean Fouquet and (it’s thought) Raphael.