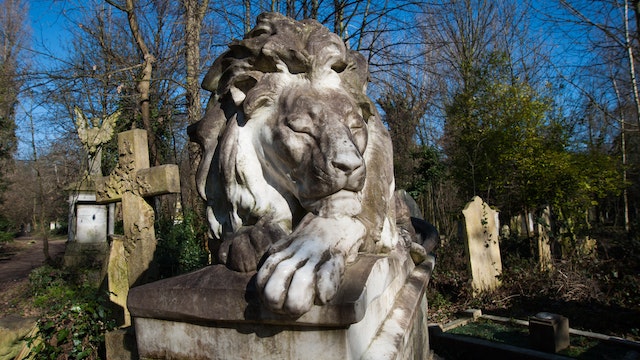 This enchanting place was bought and developed by a private firm in 1840 as a burial ground and arboretum catering for central London’s overflow. It was a dissenters (ie non–Church of England) cemetery and many of the most influential Presbyterians, Quakers and Baptists are buried here, including the Salvation Army founder, William Booth. The derelict chapel at its centre could be right out of a horror film, and the atmosphere of the whole place is rather spooky.

After being neglected for several decades, during which time it turned into a delightfully overgrown ruin and developed a reputation as a gay cruising ground, its care was taken over by a charitable trust in 1991. It's now a managed wilderness, providing an important urban habitat for birds, butterflies and bugs – if you're very lucky you might spot tawny owls or sparrowhawks.

The trust, based in the wonderful Egyptian-style entrance on Stoke Newington High St, hosts events in the cemetery and offers free guided tours (donations welcome) at 2pm on the first Sunday of the month.