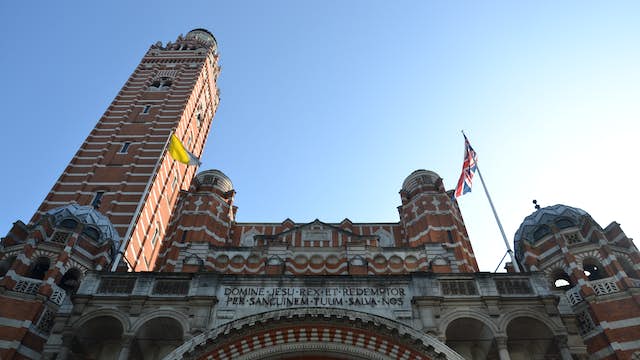 With its distinctive candy-striped red-brick and white-stone tower features, John Francis Bentley’s 19th-century Cathedral of the Most Precious Blood, the mother church of Roman Catholicism in England and Wales, is a splendid example of neo-Byzantine architecture. Although construction started here in 1895 and worshippers began attending services seven years later, the church ran out of money and the sparse interior remains largely unfinished, although some radiant mosaics dazzle from the altar and side chapels.

The Chapel of the Blessed Sacrament, to the left of the main altar, is ablaze with Eastern Rite mosaics and ornamented with 100 types of marble; the arched ceiling of the Lady Chapel on the other side of the main altar is also richly presented. Some other areas of the church remain unfaced brick.

The highly regarded stone bas-reliefs of the Stations of the Cross (1918) by Eric Gill and the marvellously sombre atmosphere make this a welcome haven from the traffic outside. The views from viewing gallery 64m (210ft) up in the 83m (272ft) bell tower – thankfully, accessible by lift – are impressive. The church plate and ecclesiastical objects on display in the Treasury are a delight and there's a cafe near the Baptistery to the right as you enter. Several Masses are held daily, including one in Latin (usually at 10.30am), and one accompanied by the cathedral's choir (at 5.30 or 6pm); check the website for the details.