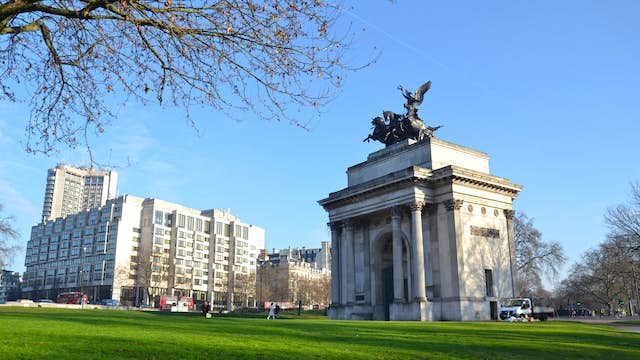 Dominating the green space throttled by the Hyde Park Corner roundabout, this imposing neoclassical 1826 Corinthian arch originally faced the Hyde Park Screen, but was shunted here in 1882 for road widening. Once a police station, the arch today has four floors of galleries and temporary exhibition space as well as a permanent display about the history of the arch and a gift shop. The open-air balconies (accessible by lift) afford unforgettable views of Hyde Park, Buckingham Palace and the Mall.

Originally crowned by a disproportionately large equestrian statue of the Duke of Wellington (which now stands in Aldershot in Hampshire), it was replaced by the current four-horse Peace Descending on the Quadriga of War, Europe’s largest bronze sculpture, in 1912. Play your cards right and catch the Household Cavalry (which form the Queen’s Lifeguard) passing beneath the arch en route to the Changing of the Guard at around 10.45am and returning at 11.45am from Monday to Saturday and on Sundays at 9.45am and 10.45am (arriving five or so minutes early is a good idea).