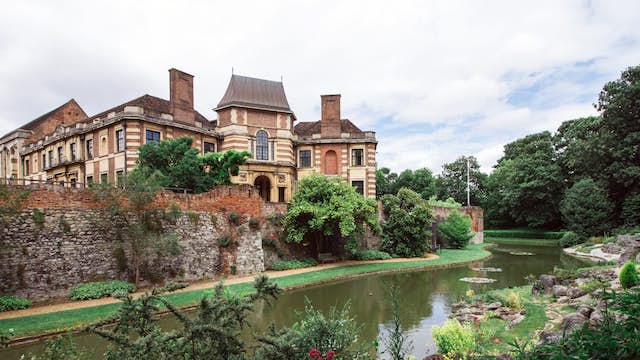 This gorgeous 1930s art-deco mansion was built by Stephen Courtauld, whose family made a fortune in the rayon (artificial silk) industry, and his wife Virginia (Ginie) as a country estate for entertaining guests. It features high-tech amenities of the time, such as telephones, electrically synchronised clocks, a built-in vacuum system and a boiler with enough hot water for 12 baths at the same time, but is also attached to the remnants of a medieval royal estate.

A royal palace was built on this site in 1305 and was the boyhood home of Henry VIII before the Tudors decamped to Greenwich. Apart from the restored Great Medieval Hall, which has been incorporated into the mansion, little of that palace remains.

Visitors view the mansion's rooms and the medieval hall on a self-paced tour with an entertaining handheld multimedia guide, from the built-in cage for the pet lemur purchased from Harrods to the impressive domed entrance hall panelled in veneered Australian black-bean wood and the black marble dining room with silver-foil ceiling and heavy black doors decorated with lacquered animal figures.

The Map Room, where the couple plotted their extensive travels, was unveiled after 70 years of being covered by wallpaper and has wonderfully restored, if colonialist stereotyped, imagery. During the Blitz, the basement was converted to a deluxe air-raid shelter. Outside, there are 8 hectares of gardens to explore, include a rockery and moat with working bridge, so dedicate at least half a day.