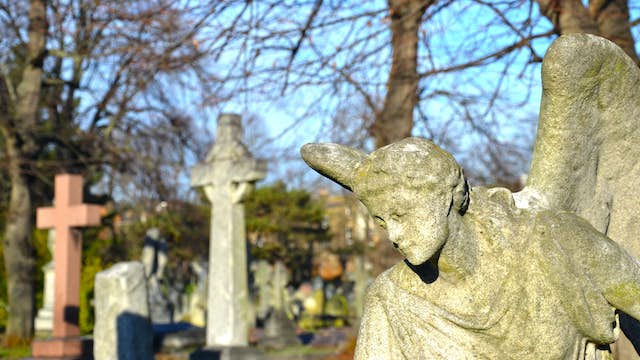 The UK's sole cemetery owned by the Crown, this atmospheric 19th-century, 16-hectare boneyard's most famous denizen may be suffragette Emmeline Pankhurst, but it's also fascinating as the possible inspiration for many of Beatrix Potter’s characters. A local resident in her youth, Potter may have noted some of the names on headstones: there's a George Nutkins, Mr McGregor, Jeremiah Fisher, Tommy Brock – even a Peter Rabbet! The chapel and colonnades at one end are modelled on St Peter’s in Rome.

Two-hour tours (suggested donation £8; cash only) depart at 2pm from the chapel every Sunday from May to August (and two Sundays a month in September, October, November, March and April). There is no need to reserve, just turn up. At the time of writing, visits to the catacombs were to become a more regular option, due to their popularity (see www.brompton-cemetery.org.uk for details). The catacombs can also be visited during the annual summer open day. See the website for a map and list of notable individuals buried within the cemetery grounds. A visitor centre in the North Lodge East (by the cemetery entrance off Old Brompton Road) is open between 10am and 4pm on Friday, Saturday and Sunday.