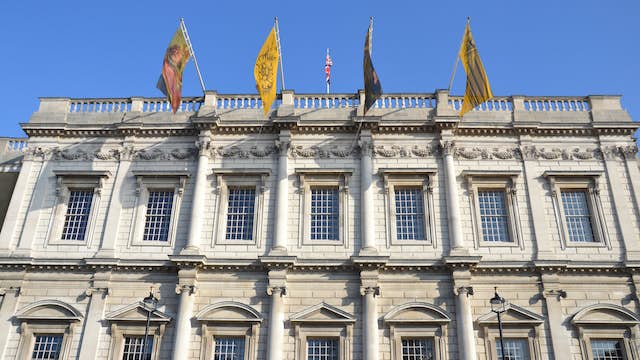 Banqueting House is the sole surviving section of the Tudor Whitehall Palace (1532) that once stretched most of the way down Whitehall before burning to the ground in a 1698 conflagration. Designed by Inigo Jones in 1622 and refaced in Portland stone in the 19th century, Banqueting House was England’s first purely Renaissance building and resembled no other structure in the country at the time. Don't miss The Undercroft cellar.

In a huge, virtually unfurnished hall on the 1st floor there are nine ceiling panels painted by Peter Paul Rubens in 1635. They were commissioned by Charles I and celebrate the 'benefits of wise rule' and the Union of England and Scotland Act (1603).

A bust outside commemorates the date 30 January 1649, when Charles I, accused of treason by Oliver Cromwell during the Civil War, was executed here on a scaffold built against a 1st-floor window. When the monarchy was reinstated with Charles's son crowned as Charles II, it became something of a royalist shrine. Look to the clock tower opposite at Horse Guards Parade – the number 2 (the time of the execution) has a black background.