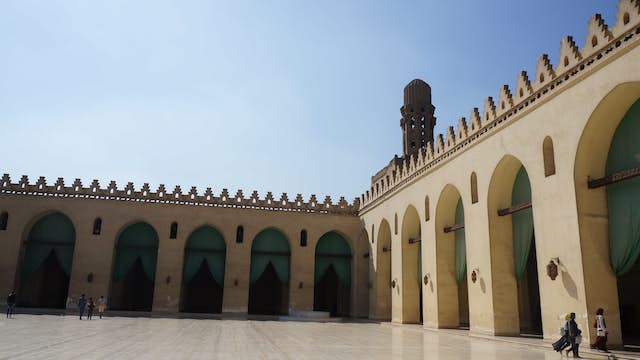 Completed in 1013, the vast and starkly plain Mosque of Al Hakim built into the northern walls, is one of Cairo’s older mosques, but it was rarely used for worship. Instead it functioned as a Crusaders’ prison, a stable, a warehouse, a boys’ school and, most appropriately considering its notorious founder, a madhouse. The real masterpieces are the two stone minarets, the earliest surviving in the city (thanks in part to a post-earthquake restoration in 1304 by Beybars Al Gashankir).

Sultan Al Hakim, the sixth Fatimid ruler of Egypt, took the throne at the age of 11 and his tutor nicknamed him ‘Little Lizard’ because of his frightening looks and behaviour. His 24-year reign was marked by violence and behaviour that went far beyond the usual court intrigues; modern historians speculate he may simply have been insane. Those nearest to him lived in constant fear for their lives. He had his nicknaming tutor killed, along with scores of others. Hakim reputedly often patrolled the streets in disguise, riding a donkey. Most notoriously, he punished dishonest merchants by having them dealt with by a well-endowed black servant. His death was as bizarre as his life. On one of his solitary nocturnal jaunts up onto the Muqattam Hills, Hakim simply disappeared; his body was never found. To one of his followers, a man called Al Darizy, this was proof of Hakim’s divine nature. From this seed Al Darizy founded the sect of the Druze that continues to this day. An Ismaili Shiite group restored the mosque in the 1980s, but with its open-plan square and spare decoration, it’s not nearly as interesting as the man behind it.