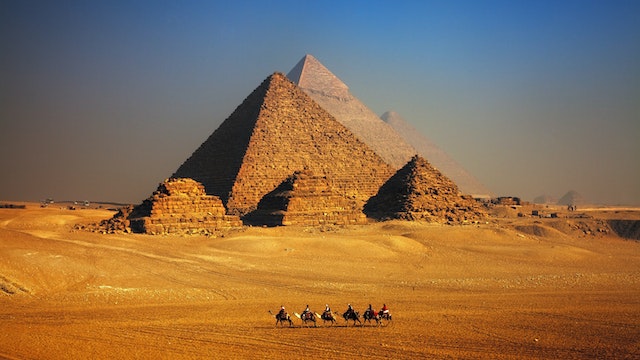 The last remaining wonder of the ancient world; for nearly 4000 years, the extraordinary shape, impeccable geometry and sheer bulk of the Giza Pyramids have invited the obvious questions: ‘How were we built, and why?’. Centuries of research have given us parts of the answer. Built as massive tombs on the orders of the pharaohs, they were constructed by teams of workers tens-of-thousands strong. Today they stand as an awe-inspiring tribute to the might, organisation and achievements of ancient Egypt.

Ongoing excavations on the Giza Plateau, along with the discovery of a pyramid-builders' settlement, complete with areas for large-scale food production and medical facilities, have provided more evidence that the workers were not the slaves of Hollywood tradition, but an organised workforce of Egyptian farmers. During the flood season, when the Nile covered their fields, the same farmers could have been redeployed by the highly structured bureaucracy to work on the pharaoh’s tomb. In this way, the Pyramids can almost be seen as an ancient job-creation scheme. And the flood waters made it easier to transport building stone to the site.

But despite the evidence, some still won’t accept that the ancient Egyptians were capable of such achievements. So-called pyramidologists point to the carving and placement of the stones, precise to the millimetre, and argue the numerological significance of the structures’ dimensions as evidence that the Pyramids were constructed by angels or aliens. It’s easy to laugh at these out-there ideas, but when you see the monuments up close, especially inside, you’ll better understand why so many people believe such awesome structures must have unearthly origins.

Most visitors will make a beeline straight to the four most famous sights; the Great Pyramid of Khufu, the Pyramid of Khafre, the Pyramid of Menkaure and the Sphinx. But for those who want to explore further, the desert plateau surrounding the pyramids is littered with tombs, temple ruins and smaller satellite pyramids.