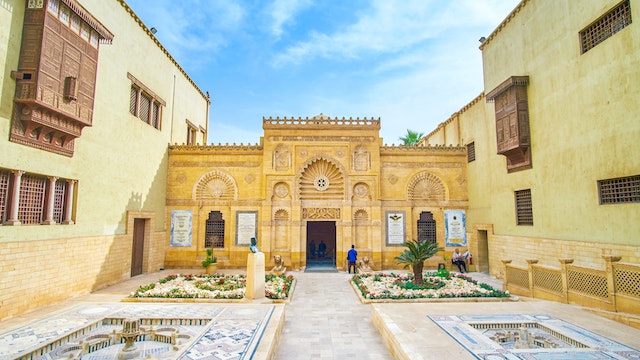 This museum, founded in 1908, houses Coptic art from the earliest days of Christianity in Egypt right through to early Islam. It is a beautiful place, as much for the elaborate woodcarving in all the galleries as for the treasures they contain. These include sculpture that shows obvious continuity from the Ptolemaic period, rich textiles and whole walls of monastery frescoes. Allow at least a couple of hours to explore the 1200 or so pieces on display.

The 2nd- to 5th-century funerary stelae from Kom Abou Billou clearly show the transition between Pharaonic and Coptic art, with the first crosses shaped like the ankh, key of life. The 4th- and 5th-century sculpture equally marks this transition, where Christian symbolism was influenced by Graeco-Roman mythology as well as older Pharaonic subjects. Rebirth through baptism of water is suggested by Aphrodite emerging from the waters on a seashell. Look out for the wonderful 7th- to 8th-century work of three mice asking a cat for peace. In Egypt the depiction of animals behaving like humans dates back to 1500 BC.

Upstairs are two large rooms with exquisite 4th- to 7th-century Coptic textiles, woven and embroidered, and a room with the Nag Hammadi manuscripts, the primary source for Gnosticism, and the oldest book of psalms in the world, the Psalms of David, with two original wooden covers.