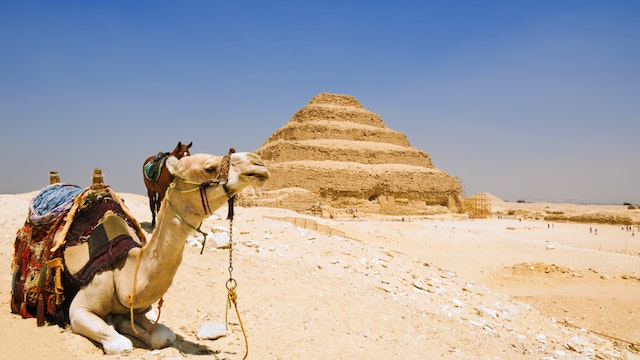 Covering a 7km stretch of the Western Desert, Saqqara, the huge cemetery of ancient Memphis, was an active burial ground for more than 3500 years and is Egypt’s largest archaeological site. The necropolis is situated high above the Nile Valley’s cultivation area, and is the final resting place for deceased pharaohs and their families, administrators, generals and sacred animals. The name Saqqara is most likely derived from Sokar, the Memphite god of the dead.

Old Kingdom pharaohs were buried within Saqqara’s 11 major pyramids, while their subjects were buried in the hundreds of smaller tombs. Most of Saqqara, except for the Step Pyramid, was buried in sand until the mid-19th century, when the great French Egyptologist Auguste Mariette uncovered the Serapeum. Since then, it has been a gradual process of rediscovery: the Step Pyramid’s massive funerary complex was not exposed until 1924, and it is in a constant state of restoration. French architect Jean-Philippe Lauer, who began work here in 1926, was involved in the project for an incredible 75 years until his death in 2001. More recently, there has been a string of new discoveries, including a whole slew of mummies and even a new pyramid.

If you keep up a good pace, you can see the high points of Saqqara in about half a day. Start with a quick visit to the Imhotep Museum, to get the lay of the land. Head for Zoser’s funerary complex, entering through the hypostyle hall, and gaze on the Step Pyramid, the world’s oldest pyramid. Walk south towards the Causeway of Unas then drive to the Pyramid of Teti to see some of the famous Pyramid Texts inside. Afterwards, pop into the nearby Tomb of Kagemni before ending with the most wonderful tomb of all, the Mastaba of Ti, with its fascinating reliefs of daily life.