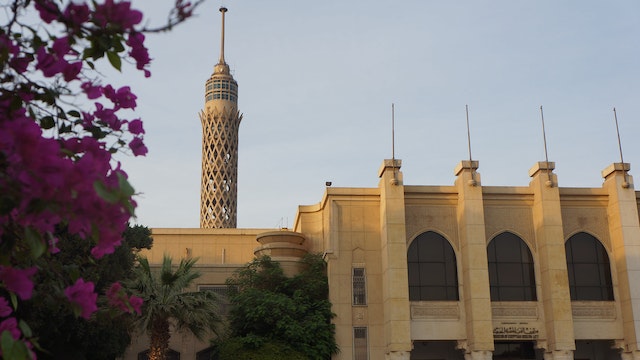 This 187m-high tower is the city’s most famous landmark after the Pyramids. Built in 1961, the structure, which resembles a stylised lotus plant with its latticework casing, was a thumb to the nose at the Americans, who had given Nasser the money used for its construction to buy US arms. The 360-degree views across the city from the top are clearest in the late morning, after the haze burns off, or late afternoon when you can often spy the Pyramids.

You might encounter a queue for the elevator at dusk, as the tower is extremely popular with Cairenes. The Sky Window cafe, one floor down from the observation deck, serves not-too-exorbitant drinks and food (beer LE47, sandwiches LE53 to LE65), and although mains are served with the saddest side salad known to man, the actual sandwiches are quite nice. The 360 Revolving Restaurant just below that is a bit pricier (mains LE120 to LE220).

If you're walking from Downtown, turn right onto Sharia Saraya Al Geriza after walking across Qasr El Nil Bridge, and then take the second left.