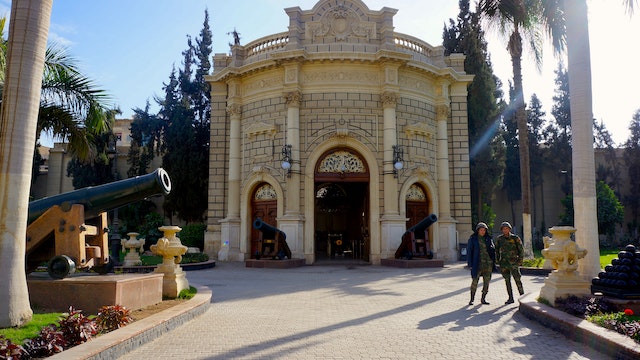 Unless you're into armaments (or over-the-top golden objects gifted to various Egyptian presidents), Abdeen Palace can easily be missed. Today the once regal salons are home to a military museum, the unintentionally funny presidential-gift rooms complete with gold palm tree and a painting of President Sisi made entirely from thumb tacks, and also a museum that holds some highly elaborate 18th- and 19th-century silverware.

Begun in 1863, the palace was a centrepiece of Khedive Ismail’s plan for a modern Cairo, inspired by Paris’ then-recent makeover; the khedive even called in mastermind French planner Baron Haussmann as a consultant. He wanted the palace finished for the 1869 opening of the Suez Canal, to impress visiting dignitaries, but its 500 rooms weren’t completed until 1874. It was the royal residence until the monarchy was abolished in 1952.

The museum's entry is on the east side. The ticket office is in the building across the road.