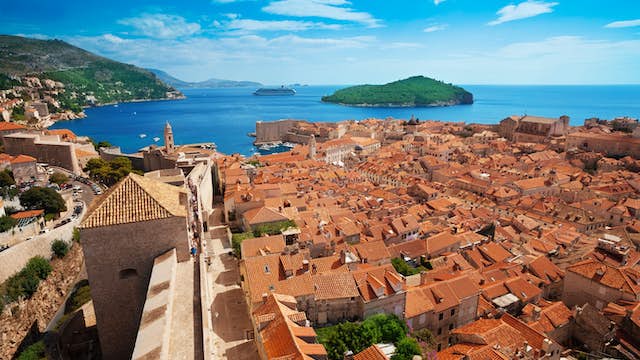 Lush Lokrum is a beautiful, forested island full of holm oaks, black ash, pines and olive trees, only a 10-minute ferry ride from Dubrovnik's Old Harbour. It's a popular swimming spot, although the beaches are rocky. Boats leave roughly hourly in summer (half-hourly in July and August). The public boat ticket price includes the entrance fee, but if you arrive with another boat, you're required to pay 120KN at the information centre on the island.

The island's main hub is its large medieval Benedictine monastery, which houses a restaurant and a display on the island's history and the TV show Game of Thrones, which was partly filmed on Lokrum. This is your chance to pose imperiously on a reproduction of the Iron Throne. The monastery has a pretty cloister garden and a significant botanical garden, featuring giant agaves and palms from South Africa and Brazil. Near the centre of the island is circular Fort Royal, commenced during the French occupation in the early 19th century but mainly used by the Austrians. Head up to the roof for views over the old town.

To reach the nudist beach, head left from the ferry and follow the signs marked FKK; the rocks at its far end are Dubrovnik's de facto gay beach. Another popular place for a swim is the small saltwater lake known as the Dead Sea.

Make sure you check what time the last boat to the mainland departs. Note that no one can stay overnight and smoking is not permitted anywhere on the island.