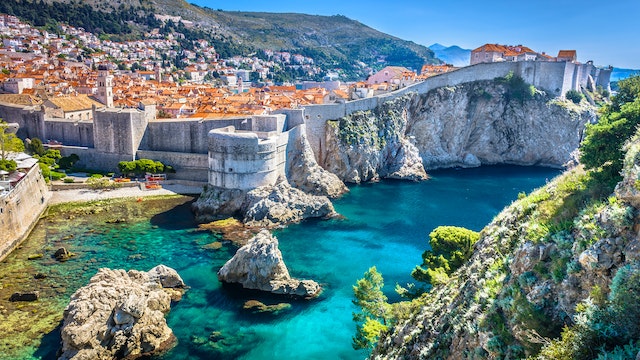 No visit to Dubrovnik is complete without a walk around the spectacular city walls that encircle its historic core. They're among the finest in the world and are the city's defining feature. From the top, the view over the old town and the shimmering Adriatic is sublime. From the sea, the juxtaposition of pinkish-grey stone and azure waters is mesmerizing, while from above the tight maze of church steeples and terracotta roofs is the setting for a fairy tale – or, at the very least, some Game of Thrones episodes.

The first set of walls to enclose the city was built in the 9th century. In the middle of the 14th century the 1.5m-thick defences were fortified with 15 square forts. The threat of attacks from the Turks in the 15th century prompted the city to strengthen the existing forts and add new ones, so that the entire old town was contained within a stone barrier 2km long and up to 25m high. The walls are thicker on the land side – up to 6m – and range from 1.5m to 3m on the sea side.

Historically, the entrance to the city was via two elaborate gates: the Pile Gate to the west and the Ploče Gate to the east. Both have drawbridges that were raised at sunset when the doors were locked and the keys handed to the rector. A third entrance, the Buža Gate, was added to the northern wall at the top of Boškovićeva street in 1907.

The most impressive of the three is the Pile Gate, built in 1537, which remains the main entrance to the town. Note the stone Statue of St Blaise, holding the city in his hands, set in a niche over the Renaissance portal. This 4th-century Armenian martyr is Dubrovnik's patron saint, and similar images are positioned in various parts of the wall and above all the major entrances. After passing through the outer gate you'll enter a large court with a ramp and stairs heading down to the inner gate, dating from 1460 and topped by a statue of St Blaise by leading Croatian sculptor Ivan Meštrović (1883–1962).

Round Fort Minčeta protects the landward edge of the city from attack. Fort Bokar is the westernmost tower, built to protect Pile Gate. Fort Lawrence, a large, free-standing fortress, was built to guard the city's western approach from invasion by land and sea, with walls from 13ft to 39ft (4m to 12m) thick. The views back over the old town from here are wonderful.

Fort Revelin is the largest of the old-town forts. It sits separately from the city walls, overlooking the Old Harbour and the eastern entrance to the old town. The massive battlement of Fort St John dates to the 16th century, but you may be able to spot the outline of the original square tower (built in 1346) that predated it. You can pose on cannons along the upper terrace during a city walls walk, but you’ll need separate tickets to visit the attractions within.

There are ticketed entrances to the city walls near the Pile Gate, the Ploče Gate and the Maritime Museum. To reduce congestion, you're required to walk the walls in an anticlockwise direction. At busy times it can resemble a sweaty, slow-moving conga line. Don't let that put you off: the views over the old town and the Adriatic are worth any frustration resulting from a busy period.

One of the most charming aspects of the walk (although perhaps not for Dubrovnik's long-suffering residents) is the glimpses it gives into hidden gardens and courtyards in the residential fringes of the town.

Starting from the Ploče Gate entrance, you'll quickly reach St Luke's Tower (1467), facing the Old Harbour and Fort Revelin. The northern, landward section of wall is the highest, reaching a peak at rounded Fort Minčeta at the city's northwestern corner. This massive structure was completed in 1464 to designs by Juraj Dalmatinac, who is most famous as the creator of Šibenik's extraordinary cathedral. The battlements at the top provide remarkable views over the old town's rooftops. You can get a good handle on the extent of the shelling damage in the 1990s: those rooftops sporting bright new terracotta suffered damage and had to be replaced.

From here it's mainly downhill as you pass over Pile Gate and then narrow to single file as you climb towards Fort Bokar at the city's southwestern corner. The seaward stretch of the walls passes a couple of cafe-bars and souvenir stores, before terminating at Fort St John at the entrance to Dubrovnik's Old Harbour.

Dubrovnik's walls and forts feature prominently in the HBO series Game of Thrones. Fort Minčeta was used for the exterior shots of Qarth's House of the Undying, Tyrion Lannister commanded the defence of King's Landing from the seaward-facing walls during the Battle of the Blackwater and, if you can look past all of the CGI enhancements, you'll recognize Fort Lawrence as the core of the Red Keep.

Tickets can be bought at the entrance, but you will skip the line if you buy online in advance.

Don't underestimate how strenuous the wall walk can be, especially on a hot day. There's very little shelter and the few vendors selling water on the route tend to overcharge.