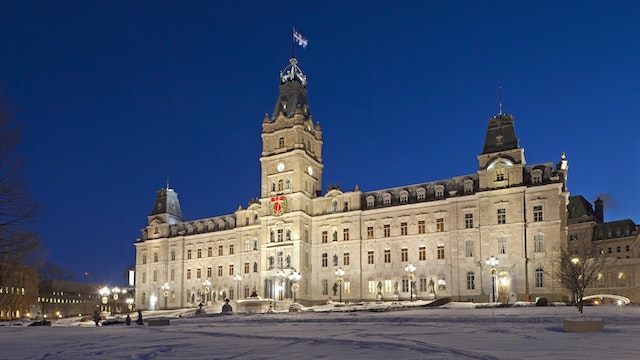 Engraved above the entrance and just below the province's coat of arms is its motto: Je me souviens (I remember). It was placed here in 1883.

On the grounds are more recent figures in Québec’s tumultuous history, including Maurice Duplessis (1890–1959), who kept a stranglehold on the province during his 20-year-long premiership, and René Lévesque (1922-87), founder of the Parti Québécois (PQ), who first attempted through referendum to negotiate the political independence of Québec. The grounds are also used for staging events during Winter Carnival.

Note the flower-trimmed Fontaine de Tourny (Tourny Fountain) facing the grounds, a gift from the Simons department store, installed in 2007 to celebrate Québec City’s 400th anniversary the following year. It was built in the mid-19th century and graced the Allées de Tourny in Bordeaux, Québec's sister city, before Simons bought and restored it. It's a fine vantage point for photographing the building.