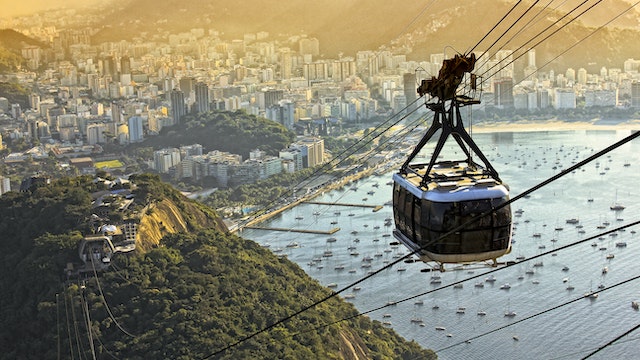 Seen from the peak of Pão de Açúcar, Rio is undoubtedly a Cidade Maravilhosa (Marvelous City). There are many good times to make the ascent, but sunset on a clear day is the most rewarding. Two cable cars connect to the summit, 395m above Rio. At the top, the city unfolds beneath you, with Corcovado mountain and Cristo Redentor (Christ the Redeemer) off to the west, and Copacabana Beach to the south.

A visit to Pão de Açúcar is a must, but be prepared for heavy crowds. If possible, go first thing in the morning – and avoid going on cloudy days.

The first cable car ascends 215m to Morro da Urca. From here, you can see Baía de Guanabara (Guanabara Bay) and the winding coastline; on the ocean side of the mountain is Praia Vermelha. Morro da Urca has souvenir shops, snack bars, a concert venue (Arena Morro da Urca) and a helipad (helicopter tours are offered by Helisight).

Those who’d rather take the long way to the top should sign up with one of the granite-hugging climbing tours offered by various outfits in Rio. Morro da Urca is much easier to climb, and you can do it on your own. The short but steep path takes about 30 minutes to climb. You’ll find the unmarked trail along the Pista Cláudio Coutinho.