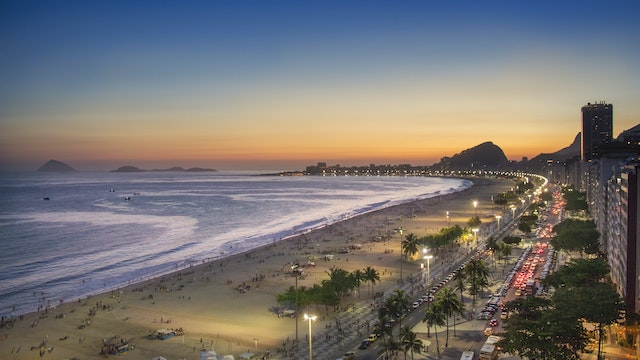 A magnificent confluence of land and sea, the long, scalloped beach of Copacabana extends for some 4km, with a flurry of activity along its length: over-amped soccer players singing their team's anthem; cariocas (Rio residents) and tourists lining up for caipirinhas at kiosks; favela kids showing off their soccer skills; and beach vendors shouting out their wares among the tanned beach bodies.

Each group stakes out its stretch of sand. The area between the Copacabana Palace hotel and Rua Fernando Mendes is the gay and cross-dresser section, known as the Stock or Stock Market – easily recognized by the rainbow flag. Young football and futevôlei (soccer volleyball) players hold court near Rua Santa Clara. Postos 5 and 6 are a mix of favela kids and carioca retirees, while the spot next to Forte de Copacabana is the colônia dos pescadores (fishermen’s colony). As Copacabana Beach curves north you get into the quieter sands of Leme (Av Princesa Isabel forms the demarcation between the two neighborhoods). Here you'll find a mix of older Leme residents as well as kids from the nearby favelas of Babilônia and Chapeu Mangueira.

The beach is lit at night and there are police in the area, but it’s still not wise to walk there after dark – stay near the liveliest beach kiosks when venturing out. Av NS de Copacabana is also sketchy – watch out on weekends, when the shops are closed and there are few locals around.