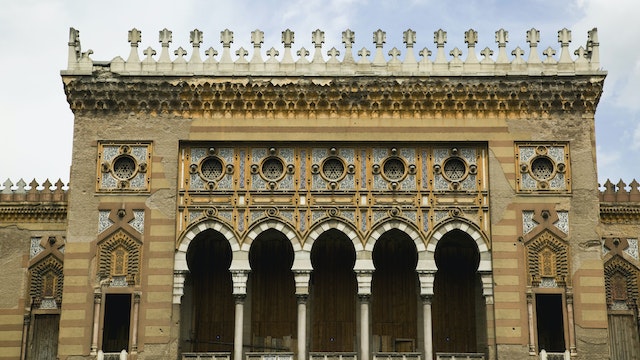 A storybook neo-Moorish striped facade makes the triangular Vijećnica (1896) Sarajevo's most beautiful Austro-Hungarian–era building. Seriously damaged during the 1990s siege, it finally reopened in 2014 after laborious reconstruction. Its colourfully restored interior and stained-glass ceiling are superb. Your ticket also allows you to peruse the excellent Sarajevo 1914–2014 exhibition in the octagonal basement. This gives well-explained potted histories of the city's various 20th-century periods, insights into fashion and music subcultures, and revelations about Franz Ferdinand's love life.

In 1914 Franz Ferdinand and his much frowned-upon wife Sophie (his mother's former lady-in-waiting) had been on their way back from this very building when they were shot by Gavrilo Princip. From 1949 the building became the National Library but in August 1992 it was deliberately hit by a Serbian incendiary shell. Around two million irreplaceable manuscripts, books and documents were destroyed. Those that survived might one day return, but for now the building is used as the council chamber, for weddings and occasionally for concerts.

Various exhibitions are staged in the upper level and, in 2018, an ICTY (International Criminal Tribunal for the former Yugoslavia) information centre opened on the ground floor, including the contents of the original courtroom, which was shifted here from the Hague.