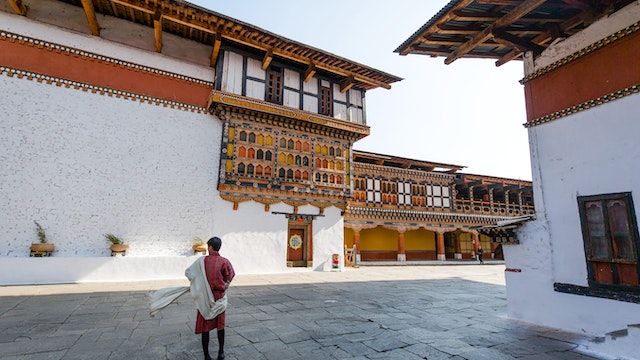 Paro Dzong ranks as a high point of Bhutanese architecture. The massive buttressed walls that tower over the town are visible throughout the valley, especially when floodlit at night. It was formerly the meeting hall for the National Assembly and now, like most dzongs, houses both the monastic body and district government offices, including the local courts. Most of the chapels are closed to tourists but it's worth a visit for its stunning architecture and views.

The dzong courtyard is open daily, but on weekends the offices are deserted. Foreign visitors should wear long sleeves and long trousers and remove their hats when entering. Citizens from South Asian Association for Regional Cooperation (SAARC) countries are charged an entry fee but foreign tourists are not, since they pay a daily minimum tariff that includes most entry fees.

The dzong's formal name, Rinchen Pung Dzong (usually shortened to Rinpung Dzong), means 'Fortress on a Heap of Jewels'. In 1644 Zhabdrung Ngawang Namgyal ordered the construction of the dzong on the foundation of a monastery built by Guru Rinpoche. The fort was used on numerous occasions to defend the Paro valley from invasions by Tibet. The British political officer John Claude White reported that in 1905 there were old catapults for throwing great stones stored in the rafters of the dzong's veranda. The dzong survived a 1897 earthquake but was severely damaged by fire in 1907.

The dzong is built on a steep hillside, and the front courtyard of the administrative section is 6m higher than the courtyard of the monastic portion. The road to the National Museum branches down to the dzong's northeastern entrance, which leads into the dochey (courtyard). The utse (central tower) inside the dochey is five storeys tall and was built in the time of the first penlop (governor) of Paro in 1649. The richly carved wood, painted in gold, black and ochres, and the towering whitewashed walls reinforce the sense of established power and wealth.

A stairway leads down to the monastic quarter, which houses about 200 monks. The kunrey, which functions as the monks' classroom, is on the southern side (to the left) and centred around an image of Buddha aged 16. Look left of the exterior vestibule for the mural of the 'mystic spiral', a uniquely Bhutanese variation on the mandala. Other murals here depict Mt Meru, the legendary centre of the universe, surrounded by seven mountain ranges and four continents.

The large dukhang (prayer hall) opposite has lovely exterior murals depicting the life of Tibet's poet-saint Milarepa. The first day of the spring Paro tsechu is held in this courtyard, which fills to bursting point. The views from the courtyard's far windows are superb.

Outside the dzong, to the northeast of the entrance, is a stone-paved festival ground where masked dancers perform the main dances of the tsechu. A thondrol – a huge thangka (painted or embroidered religious picture) of Guru Rinpoche of more than 18 sq metres, is unfurled shortly after dawn on the final day of the tsechu – you can see the huge rail upon which it is hung. It was commissioned in the 18th century by the eighth desi (secular ruler of Bhutan), also known as Druk Desi, Chhogyel Sherab Wangchuck.

Below the dzong, a traditional wooden covered bridge called Nyamai Zam spans the Paro Chhu. This is a reconstruction of the original bridge, which was washed away in a flood in 1969. Earlier versions of this bridge were removed in times of war to protect the dzong. The most picturesque photos of Paro Dzong are taken from the west bank of the river, just downstream from the bridge.