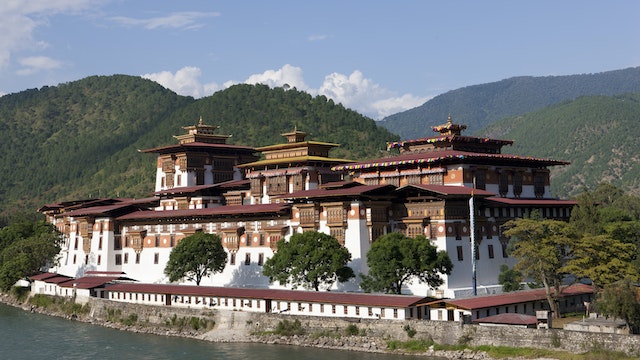 Punakha Dzong is arguably the most beautiful dzong in the country, especially in spring when the lilac-coloured jacaranda trees bring a lush sensuality to the dzong's characteristically towering whitewashed walls. This dzong was the second to be built in Bhutan and it served as the capital and seat of government until the mid-1950s. All of Bhutan's kings have been crowned here. The dzong is still the winter residence of the dratshang (official monk body).

Guru Rinpoche foretold the construction of Punakha Dzong, predicting that a person named Namgyal would arrive at a hill that looked like an elephant. When the Zhabdrung visited Punakha he chose the tip of the trunk of the sleeping elephant at the confluence of the Mo Chhu and Pho Chhu as the place to build a dzong.

A smaller building called Dzong Chung (Small Dzong) housed a statue of the Buddha here as early as 1326. Construction on the current dzong began in 1637 and was completed the following year, when the building was christened Pungthang Dechen Phodrang (Palace of Great Happiness). Later embellishments included the construction of a chapel to commemorate the victory over the Tibetans in 1639. The arms captured during the battle are preserved in the dzong. The Zhabdrung established a monk body here with 600 monks from Cheri Goemba.

Punakha Dzong is 180m long and 72m wide and the utse (central tower) is six storeys high. The gold dome on the utse was built in 1676 by local ruler Gyaltsen Tenzin Rabgye. Many of the dzong's features were added between 1744 and 1763 during the reign of the 13th desi (secular ruler), Sherab Wangchuk. One item he donated was the chenmo (great) thondrol, a large thangka (painted or embroidered religious picture) that depicts the Zhabdrung and is exhibited to the public once a year during the tsechu festival. A brass roof for the dzong was a gift of the seventh Dalai Lama, Kelzang Gyatso.

Frequent fires (the latest in 1986) have damaged the dzong, as did the severe 1897 earthquake. In 1994 a glacial lake burst on the Pho Chhu, causing damage to the dzong that has since been repaired.

Access to the dzong is across the Bazam bridge, which was rebuilt in 2008 after the original 17th-century bridge was washed away in floods in 1958. The room above the bridge entrance has displays on the renovations and on Bhutanese cantilevered bridge architecture.

In addition to its strategic position at the river confluence, the dzong has several other features to protect it against invasion. The steep wooden entry stairs are designed to be pulled up, and there is a heavy wooden door that is still closed at night.

The dzong is unusual in that it has three docheys (courtyards) instead of the usual two. The first (northern) courtyard is for administrative functions and houses a huge white Victory Chorten and bodhi tree. In the far left corner is a collection of stones and a shrine to the Tsochen, queen of the naga (snake spirits), whose image is to the side.

The second courtyard houses the monastic quarters and is separated from the first by the utse. In this courtyard there are two halls, one of which was used when Ugyen Wangchuck, later the first king, was presented with the Order of Knight Commander of the Indian empire by John Claude White in 1905.

In the southernmost courtyard is the temple where the remains of the terton, Pema Lingpa, and Zhabdrung Ngawang Namgyal are preserved. The Zhabdrung died in Punakha Dzong, and his body is still preserved in the Machey Lhakhang (machey means 'sacred embalmed body'), which was rebuilt in 1995. The casket is sealed and may not be opened. Other than two guardian lamas, only the king and Je Khenpo may enter this room. Both come to take blessings before they take up their offices.

At the south end is the kunrey, or 'hundred-pillar' assembly hall (which actually has only 54 pillars). The exceptional murals, which were commissioned by the second Druk Desi, depict the life of Buddha. The massive gold statues of the Buddha, Guru Rinpoche and the Zhabdrung date back to the mid-18th century, and there are some fine gold panels on the pillars. The elaborately painted gold, red and black carved woods here add to the artistic lightness of touch, despite the massive scale of the dzong. This is the only chapel that is reliably open to visitors.

Bhutan's most treasured possession is the Rangjung ('Self-Created') Kharsapani, an image of Chenresig that is kept in the Tse Lhakhang in the utse of the Punakha Dzong. It was brought to Bhutan from Tibet by the Zhabdrung and features heavily in Punakha's famous dromchoe festival. It is closed to the public.

After you exit the dzong from the north you can visit the dzong chung and get a blessing from a wish-fulfilling statue of Sakyamuni. The building marks the site of the original dzong. North of the dzong is a cremation ground, marked by a large chorten, and to the east is a royal palace.