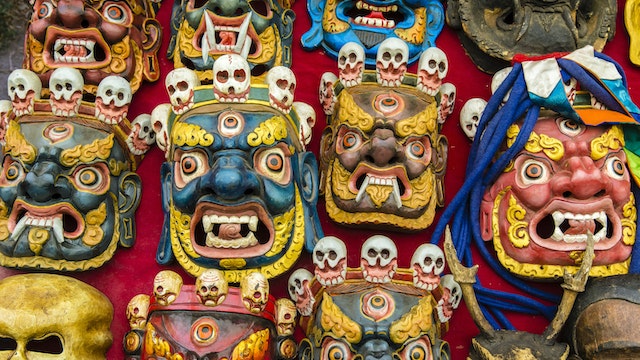 Thimphu's Weekend Market fills a maze-like pavilion on the west bank of the Wang Chhu, just north of Changlimithang Stadium. Vendors from throughout the region start arriving on Thursday and remain until Sunday night, filling the market halls and surrounding streets with produce. The incense area is one of the most interesting, full of deliciously aromatic raw ingredients and pink cubes of camphor and saffron that are used to flavour the holy water given to pilgrims in lhakhangs.

Wander around the stalls and you'll find a pungent collection of dried fish, strips of fatty pork and discs of datse (soft cheese), as well as dried chillies, local pickles and condiments and bottles of wild honey from southern Bhutan. During the winter you can even pick up a leg of yak (with the hoof still attached). Depending on the season, look out for banana pods, jackfruit and the curly fern fronds known as nakey. The cereals section has red rice and kapche, the ground roasted barley beloved by highland Bhutanese and Tibetans (known as tsampa across the Himalaya). The action spills over into the surrounding streets, which are a buzz of activity at market time.

Nearby, across a traditional cantilevered bridge, is the weekends-only Handicrafts Market.