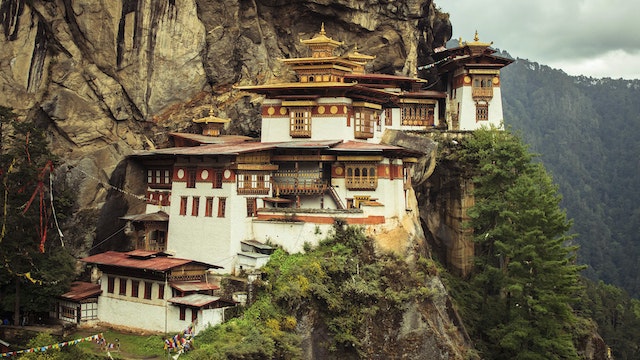 The 'Tiger's Nest Monastery' is one of the Himalaya's most incredible sights, miraculously perched on the side of a sheer cliff 900m above the floor of the Paro valley. Visiting is the goal of most visitors to Bhutan and while getting there involves a bit of uphill legwork, it's well worth the effort. The monastery is a sacred site, so act with respect, removing your shoes and hat before entering any chapels.

Bags, phones and cameras have to be deposited at the entrance, where your guide will register with the army.

As you enter the complex you pass underneath images of the Rigsum Goempo (Jampelyang, Chenresig and Chana Dorje). Turn to the right and look for the relic stone; Bhutanese stand on the starting line, close their eyes and try to put their thumb into a small hole in the rock as a form of karmic test.

Most groups then visit the Drubkhang (Pelphu Lhakhang), the cave where Guru Rinpoche meditated for three months. Outside the cave is a statue of Dorje Drolo, the manifestation the Guru assumed to fly to Taktshang on a tigress. The inner cave is sealed off behind a spectacularly gilded door and is said to hold the phurba (ritual dagger) of the Guru. Murals of the Guru Tsengye, or eight manifestations of Guru Rinpoche, decorate the walls. Behind you, sitting above the inside of the main entrance, is a mural of Thangtong Gyalpo holding his iron chains.

From here ascend to the Guru Sungjonma Lhakhang, which has a central image of Pema Jungme, another of the eight manifestations of Guru Rinpoche. This statue incorporates the ashes of a famous 'talking' image that was lost in the 1998 fire. Various demonic animal-headed deities and manifestations of the deity Phurba decorate the walls alongside the 25 disciples of Guru Rinpoche, while outside is an image of the long-life protector Tseringma riding a snow lion.

Passing a small prayer hall, the Langchen Pelgye Sengye Lhakhang on the left has connections to Dorje Phagmo, with a rock image of the goddess's crown hidden in a hole in the floor. The inner chorten belongs to Langchen Pelgye Sengye, a 9th-century disciple of Guru Rinpoche, who meditated in the cave. Behind the chorten is a holy spring.

Further on inside the complex to the left is the Dorje Drolo Lhakhang, where the monks sometimes sell blessed lockets, while to the right is the Guru Tsengye Lhakhang, which features an image of the monastery's 17th-century founder, Gyalse Tenzin Rabgye. Look down through the glass into the bowels of a sacred cave.

Further up is a butter-lamp chapel (light one for a donation). You can climb down into the original Tiger's Nest cave just above the chapel, but take care as it's a dusty path down a hairy series of wooden ladders to descend into a giant slice of the cliff face.

After visiting the Tiger's Nest and reascending to the previous viewpoint, it is possible to take a signed side trail uphill for 15 minutes to the charming Machig-phu Lhakhang, where Bhutanese pilgrims come to pray for children. Head to the cave behind the chapel and select the image of the Tibetan saint Machig Labdron on the right (for a baby girl), or the penis print on the cave wall to the left (for a boy). The main statues inside the chapel are of Machig and her husband Padampa Sangye.