Where to celebrate the dawn of democracy in South Africa

When South Africa goes to the polls this April, the country also commemorates the momentous general election that took place here on 27 April 1994. This was the first time all eligible South African citizens, regardless of the colour of their skin, could exercise their right to vote. Celebrate the 20th anniversary of the dawn of democracy in South Africa by following this trail of locations associated with the country's long walk to freedom. 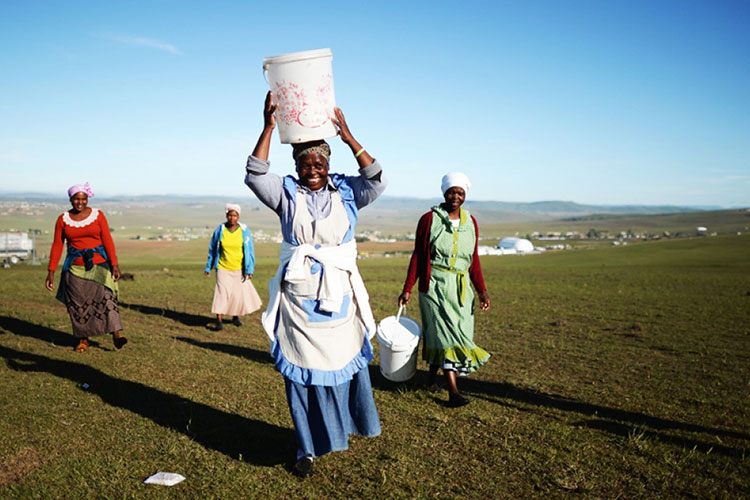 South African women in the fields near Qunu. Image by Jordi Bernabeu Farrus / CC BY 2.0.

“It is a beautiful country of rolling hills, fertile valleys and a thousand rivers and streams which keeps the landscape green even in winter.” This is how Nelson Mandela in his autobiography Long Walk To Freedom describes the lush corner of Eastern Cape in which he was born and brought up. The man who would become the country’s first freely elected president was laid to rest here following his death at the end 2013, causing a spike in visitors to the Nelson Mandela Museum (www.mandelamuseum.org.za) near the village of Qunu, where the man respectfully known as Madiba spent much of his childhood. Mandela’s grave is off limits, but in the museum you can learn about his life and the history of the African National Congress (ANC). 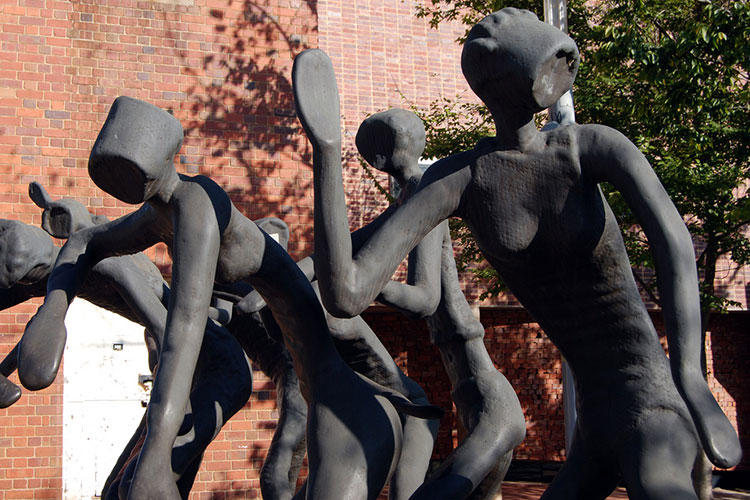 The appalling conditions that non-white South Africans endured and fought against for most of the 20th century and earlier are laid bare at Johannesburg’s Apartheid Museum. On entry you will be handed a card stating your race, thus decreeing which of the allotted gates you go through. A combination of media immerses visitors in the nightmare world of apartheid, including a tiny chamber hung with 131 nooses representing the 131 government opponents who were executed under anti-terrorism laws. The exhibitions also include inspiring accounts from the frontline in the battle for democracy.

In Jo’burg’s city centre drop by the restored Chancellor House (www.southafrica.net/za/en/articles/entry/article-southafrica.net-chancellor-house-johannesburg) to view the offices where Mandela and his partner Oliver Tambo ran their pioneering legal practice between 1952 and 1956. Save plenty of time to do justice to Constitution Hill, which focuses on South Africa’s new Constitutional Court and is built within the ramparts of the Old Fort: this 1892 building was once a prison that housed not only Mandela but also Mahatma Gandhi, who worked as a lawyer and civil rights activists in South Africa between 1893 and 1914.

Also look out for the new 40m-tall mural of a young Mandela (http://www.streetartnews.net/2014/01/freddy-sam-i-am-because-we-are-new.html) in boxing pose created by street artist Freddy Sam in Jo’burg’s Maboneng precinct. 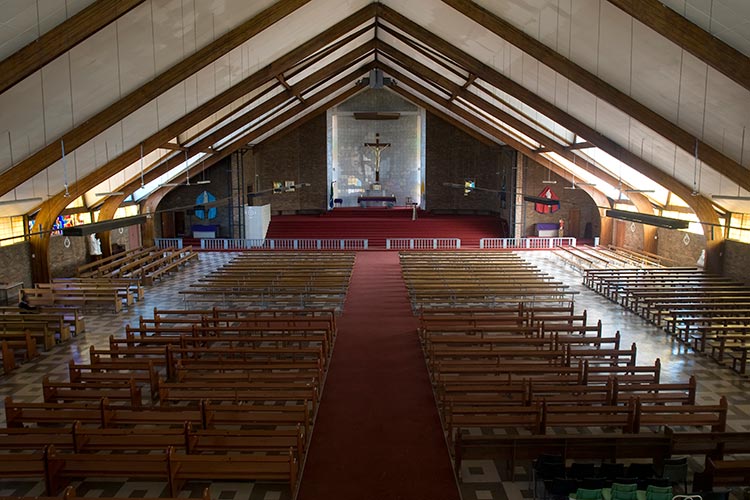 Some of the fiercest of the anti-apartheid movement’s battles were fought in the Jo’burg townships collectively known as Soweto. The former homes of both Archbishop Desmond Tutu and Mandela – now the Mandela House Museum – are here, as well as the memorial and museum dedicated to Hector Pieterson, a 13-year-old shot dead in the run up to the Soweto uprising of 1976. The Regina Mundi Church, the largest Roman Catholic Church in South Africa, was an important meeting point during the struggle against apartheid and was also used for hearings by the Truth and Reconciliation Commission in the mid-1990s.

In the Kliptown suburb of Soweto, Walter Sisulu Square (www.waltersisulusquare.co.za) commemorates both where the Freedom Charter was adopted on 26 June 1955 and Sisulu, another towering figure in the anti-apartheid movement. 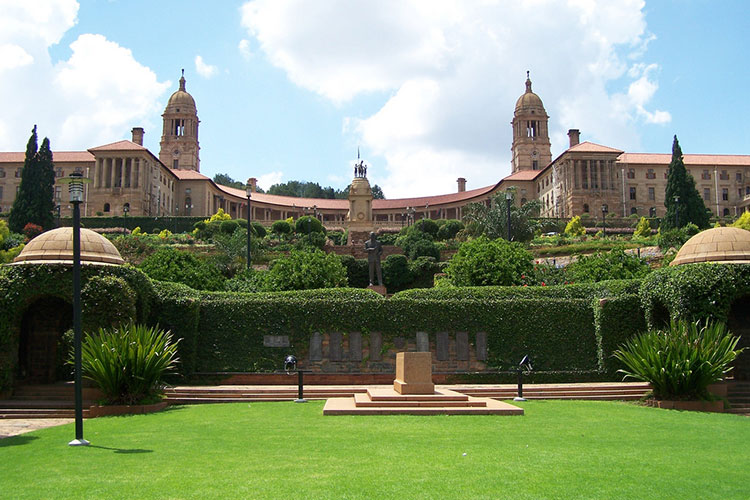 The Union Buildings in Pretoria. Image by Huhnerauge / CC BY 2.0.

South Africa’s administrative centre was at the heart of the apartheid regime. The Palace of Justice was the venue for the Rivonia Trial that sentenced Mandela and nine other leaders of the ANC to life. The court fronts on to Church Square (http://www.gauteng.net/attractions/entry/church_square) where every Wednesday at 9.30am a military parade by the National Ceremonial Guard ends with the raising of flags to the sound of the national anthem.

The handsome Union Buildings, designed by Sir Herbert Baker, are home to the presidential offices. Mandela’s inauguration took place here in 1994 and in December last year a nine metre-tall bronze statue of Madiba with outstretched arms was unveiled here a day after his funeral.

Freedom Park is a remarkable memorial that includes the 697m-long Wall of Names inscribed with the names of those who died during eight conflicts in South Africa’s history, including the liberation struggle to end apartheid. 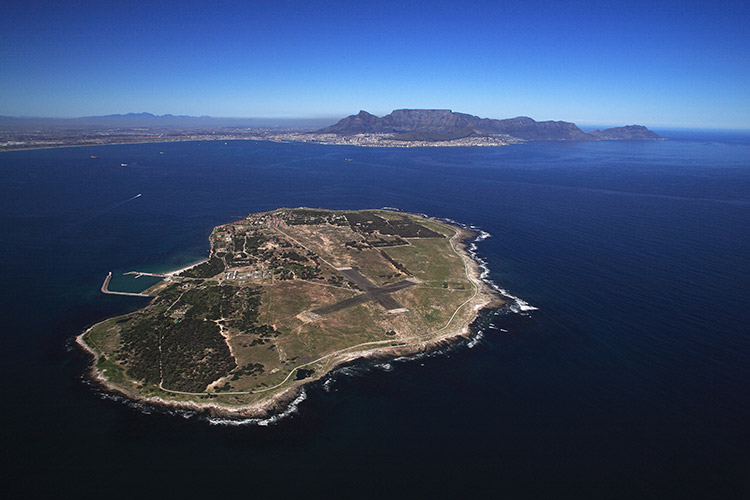 Former prisoners lead visitors on the tour around World Heritage-listed Robben Island, 12km out into Table Bay from Cape Town. Surrounded by frigid, shark-infested seas, the island prison’s most celebrated inmate was prisoner 466/64 – Mandela. Also kept here in solitary confinement for six years was Robert Sobukwe, the leader of the Pan African Congress. Even if you don’t make it out the island (tours can sometimes be booked up) there’s a small free museum - the Nelson Mandela Gateway - at the departure point at the V&A Waterfront, which focuses on the freedom struggle. While at the Waterfront, head to Noble Square for your chance to have photos taken with larger-than-life statues of Mandela, Desmond Tutu, Nkosi Albert Luthuli and FW de Klerk, all of the country’s Nobel Prize winners.

The District Six Museum celebrates a once lively multiracial area of the Cape Town that was reclassified a whites-only zone in the 1960s and subsequently destroyed as 60,000 inhabitants were forcibly removed. The emotionally moving exhibitions here, which include reconstructions of house interiors furnished with mementos, evoke a community shattered by apartheid that nevertheless refused to be ground into the dust.

Around the corner from the museum, stand on Grand Parade, where slaves were once bought and sold, and where crowds gathered to watch Mandela give his first address to the nation as a free man after 27 years in jail from the balcony of the Old Town Hall.

Simon Richmond is a long-time Lonely Planet author and photographer who tweets at @simonrichmond.