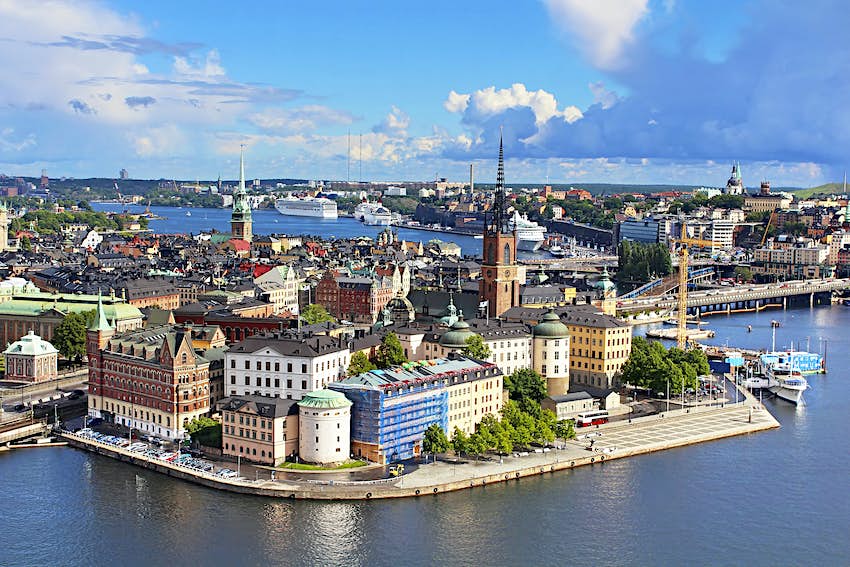 Although Stockholm has a deserved reputation as one of Europe’s pricier capitals, some of your most magical moments in this green, waterside city will be completely free. Boasting abundant forest paths, clifftop views and lakeside beaches, it’s a dream destination for nature lovers. Many of its world-class museums and galleries have scrapped admission fees in recent years. Plus there’s plenty of diverse architecture to admire, from glass-fronted eco-friendly apartments to iconic medieval townhouses. Here’s our pick of Stockholm’s top free and cheap experiences.

Get lost in the Old Town’s backstreets

The cobbled streets of Stockholm’s mesmerizing Old Town are begging to get lost in. So once you’ve ticked off the bustling tourist store thoroughfares, Västerlånggatan and Stora Nygatan, stop to catch your breath in the area’s peaceful squares and cute narrow alleys. The sand-and-spice colored buildings look especially spectacular in the evening sun, or when they’re lit up by lanterns lined up in the snow. This is one of the best preserved medieval city centers in Europe, so if you’re keen to get under the skin of its history, you can also join a guided walk with Free Tour Stockholm.

Watch the sunset from a cliff top

It’s 10pm, still warm enough to wear shorts, and you’re sipping a cold beverage watching the sun go down over a shimmering lake. Stockholm’s long summer nights sadly only last a few short weeks, so if you’re in town in June or July, be sure to find a prime spot to make the most of them. Skinnarviksberget, a rocky mountain on Södermalm’s north side and the city’s highest natural viewpoint is a prime waterview spot. Monteliusvägen, a wooden walkway slightly further east, is a more accessible option, where you can capture the Old Town’s spires and black rooftops. Outside the center, try Örnsberg’s clifftops, which catch the sun until late, and lead directly to a jump-off-jetty into Lake Mälaren. During cooler months join the city’s hardy locals in swapping your beer for a coffee flask and your beach towel for multiple blankets.

Explore the free museums and galleries

Art, science and social challenges meet at Accelerator, the city’s newest free exhibition space, inside a former experimental physics laboratory on Stockholm University’s campus. It joins a roster of museums and art galleries which have scrapped entry fees in recent years. Moderna Museet is also a must-see, where you can find works from world-renowned artists including Pablo Picasso and Salvador Dalí before relaxing in its shady inner courtyard cafe. Next door, ArcDes showcases Sweden’s love affair with architecture and design, with rotating exhibitions designed to be both admired and debated.

Kungsholmen has a reputation as one of Stockholm’s blander inner city neighborhoods, but what it lacks in culinary or cultural riches it more than makes up for with its picture-postcard coastline, known as Kungsholmenrunt to locals. This 6-mile-long (10km) island loop ranges from tranquil rocky trails flanked by sailing boats and kayakers, to the tree-lined boulevard Norr Mälarstrand, bookended by City Hall’s glistening golden spire and Rålambshovs Park, which throngs with picnickers as soon as the sun’s out. Sporty Swedes will speed past you on this circuit on weekend mornings. There are also several free wooden outdoor gyms en route.

Hop on a commuter ferry

Experiencing Stockholm from the water doesn’t need to involve splashing out on a pricey boat trip to the archipelago; there’s a bounty of beauty to be seen from the breezy top deck of the city’s commuter ferries. Journeys cost the same as a single bus or metro trip, and you can use an SL travel card or pay with a credit card. From Klara Malarstrand, next to City Hall, route 89 to Ekerö island is essentially a 50-minute tour of Swedish capital’s prime real estate, from quirky waterfront apartment blocks to historic wooden villas nestled on hillsides. Route 80 swings by several recently revitalised industrial neighbourhoods as well as some of Lidingö island’s top swimming spots. Or, simply shuttle between Slussen and Djurgården on route 82 which takes just a few minutes, yet offers one of the finest panoramas you’ll find of the historic Old Town.

Hike and dip in Hellasgården

A glistening lake, color-coded jogging and hiking trails flanked by pine trees and wildflowers, plus cliff-top lookouts aplenty – it’s all on offer for free at Hellasgården, a recreation area inside Nacka nature reserve. Just a 17-minute bus ride from Stockholm city center (route 401 from Slussen), this is an outer-city oasis loved by locals year-round. If you can spare 80-100 kronor, don’t miss the traditional Swedish wooden sauna here, where you’re expected to be naked (it’s usually divided into gender-segregated zones).

Abuzz with independent boutiques, contemporary design outlets and retro record shops, SoFo (the area south of Folkungagatan) is a great place to get inspired by Stockholmers’ impeccable style, even if you don’t have the budget or luggage space to take much home. That said, you might snap up a bargain in a secondhand store like Stockholms Stadsmission on Skånegatan, which raises money for vulnerable people in the city by selling off vintage and modern fashion donations dropped off by the neighborhood’s stylish locals. There are also regular pop-up flea markets and farmers markets during fine weather, starting at the junction between Katarina Bangata and Östgötagatan.

Stockholm’s rugged coastline provides reams of ridges beloved by bouldering enthusiasts. Beginners should head to Rålamhovs Park in Kungsholmen where there are two rock walls with color-coded grips for hands and feet. If you’re looking for a softer landing, there are several beachside climbing walls dotted around the city, which you can swim up to from the shore. The one at Tantolunden beach on Södermalm is typically encircled by tanned and toned twenty-somethings. Try Sätra beach in the south west of the city for a calmer and more family-oriented atmosphere.

Watch the Changing of the Guard

Pomp and ceremony enthusiasts won’t want to miss watching the daily Changing of the Guard outside Stockholm’s Royal Palace. It’s currently suspended and due to resume in 2022, when you can expect an impressive spectacle with all the military uniforms and brass instruments that go with such a historic tradition; the Royal Guards have been protecting the Swedish Royal Family since 1523. Each ceremony takes around 40 minutes, starting at 12.15pm on weekdays and 1.15pm on Sundays. Check the official calendar for more information.

While Stockholmers are often quick to lament that the capital’s winters are milder than they used to be, there’s still a strong chance of snow between November and March, which transforms the Swedish capital into a winter playground. Local families race for the nearest hills to sledge down; some toddlers are even transported to school on sleds. Many of the city’s lakes also freeze hard enough for ice skating and cross-country skiing. You can join in the fun even if you don’t have your own gear, thanks to Fritidsbanken, a non-profit organisation that loans winter sports equipment for free for up to 14 days. Don’t head out on the ice unless you have previous experience.

A five-slope downhill ski center during winter, Hammarbybacken is a Stockholm landmark that you can also hike for free when the snow melts. It was built on top of a rubbish dump in the 1980s in a former industrial area that’s been transformed into a slick, eco-friendly suburb over the last three decades, called Hammarbysjöstad. From the top of the hill, some 295ft (90m) above sea-level, you’ll earn yourself panoramic views across the reed-trimmed waterfront neighborhood. Other sights include the Avicii Arena (previously known as the Globe Arena or Globen), the domes and spires of Södermalm’s most stunning churches, Sofia kyrka and Katarina kyrka, and the pine tree-lined trails of Nacka nature reserve. There are several routes up Hammarbybacken, with the most popular (and flattest) starting at the car park to the left of the ticketed winter entrance.

Article first published in October 2016, and last updated in August 2021.

How to choose the best island for your Fiji vacation

5 min read • Published in about 2 hours

How best to get around the city of Edinburgh

From stargazing to ghost towns, 10 reasons to visit Arizona this fall