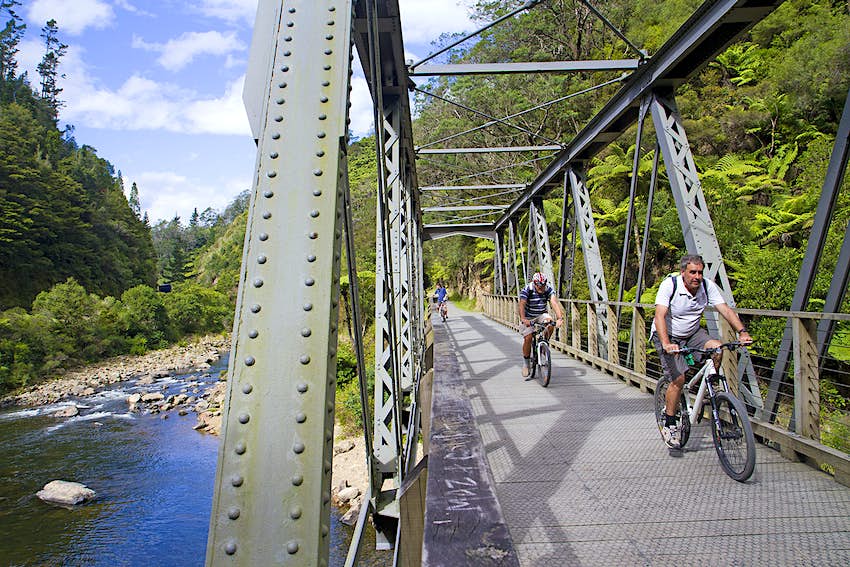 While New Zealanders have been cycling since the Victorian era, it wasn't until the 1990s that bicycles – and the sports associated with them – really took off. Even better, a bevy of new cycling trails and mountain bike networks have opened up over the past ten years, giving Kiwis even more places to pedal. Now it looks like New Zealand’s cycling revolution is set to keep rolling – in the midst of the COVID-19 pandemic, the popularity of cycling worldwide is surging even further.

Unsurprisingly, before the pandemic travellers were quick to cotton on to New Zealand's eager conversion of former railroads and other tracks and walking paths to duel use. New Zealand's reputation as an active outdoor destination prime for exploration on two wheels was encouraged by bike hire and shuttle services in all the right places. No doubt they'll be eager to enjoy their hobby again once the Aussie travel bubble pops and international travel heats back up.

In the meantime, of New Zealanders who picked up a new sport during lockdown, a whopping 78 percent chose cycling, and similarly high percentages took their bikes when they made brief forays outside. No doubt those cyclists were happy to find so many opportunities to see a lot in little time, with the bonus of fresh air and exercise. If you want to follow in their wheel prints, these day rides are an unbeatable way to go on an adventure, whether you're a hardened pro with a draw full of bike shorts or have just discovered your yen for single track and carbon.

This is the most picturesque and interesting section of the Hauraki Rail Trail, which follows an old railway line at the base of Coromandel Peninsula. Highlights of Karangahake Gorge include photogenic gold mining relics and the freaky Windows Walkway, but the pièce de résistance is an amazing 1100-metre long railway tunnel, which you wobble through with the help of a torch. Head into the gorge from Waikino Station, site of the bike hire depot and a quaint cafe.

Rotorua's 5000-hectare Whakarewarewa Forest – known as the Redwoods – is a New Zealand mountain biking magnet, with more than 100km of trails ranging from sedate to positively treacherous. Head to Waipa Mill car park for bike hire and advice on which of the zillions of options you should choose. The ‘Inner Core’ area offers fun mountain bike riding for beginners and families; another option is to cruise along easy forestry trails to the picnic area at Blue Lake.

These riverside trails make a full and fun day out of visiting Huka Falls. The Rotary Ride starts in Taupo’s thermal Spa Park and follows an undulating path along the Waikato River. The river is bridged at the thunderous Huka Falls viewing point, where riders can linger before heading back along the other side via the Redwood Track. The ride can be extended by continuing beyond the Falls to Aratiatia Dam, or heading up into Craters Mountain Bike Park.

This 15km trail follows an historic coach road around Mt Ruapehu’s forested foothills, largely forgotten and overgrown until restored by the locals. Gently graded with the occasional climb, it passes unique engineering features including two handsome viaducts. Creative interpretation panels retell stories from times past, and there are various viewpoints around the volcanic plateau. Shuttle services run riders and bikes out to Horopito, from which it’s mostly downhill back to Ohakune.

One of the country’s best year-round cycling destinations due to friendly weather and terrain, Hawke’s Bay now boasts an enviable 187km network of cycleways ranging from riverside stopbanks to quiet country roads and coastal paths. Starting at Taradale, on the edge of Napier, the Puketapu Loop is a goody, following the Tutaekuri River up one side and back down the other, with stunning rural and vineyard views, and the bonus of the rural Puketapu Pub at the halfway point.

This tasteful trail takes in wine, food and art as it loops through the Nelson region’s picturesque countryside and along the coast. The section from Motueka to Kaiteriteri serves up a delightful assortment, passing fruit stalls, cafes and a craft brewery on its way along quiet lanes and orchard roads. Emerging from the fruitlands, the trail follows a coastal cycleway before entering Kaiteriteri Mountain Bike Park. Tasman Bay views and the glorious golden sands and swimming at Kaiteriteri Beach make the gentle climb worthwhile.

One of 22 national Great Rides, the 70km Queen Charlotte Track is a magnet for intermediate cyclists who complete it in two days. Those looking for a day trip can enjoy many of its Marlborough Sounds’ views by starting at Torea Saddle and riding through to Anakiwa, with the option of a scenic detour along the road to reduce the overall effort. Highlights include the boat cruise to get there, sweeping downhills, sweet-smelling beech forest, and a series of bays including Mistletoe where you can jump off the jetty.

This 120km trail from Greymouth to Ross retraces the paths left by pioneering packhorses, trams and trains, with new routes forged to link them. The result is a trail revealing spectacular vistas of dense rainforest, glacial rivers, lakes and wetlands, as well as the snow-capped Southern Alps and the wild Tasman Sea. A leisurely ride can be had from Greymouth, along the Tasman Sea coast with dunes and lagoons, along a tram line though regenerating bush and farmland to Kumara, site of the beautifully restored Theatre Royal Hotel.

The 100km Queenstown Trails range from easy lakeside jaunts to cross-country treks. This one is the latter, starting at Arrowtown and following the Arrow River, crossing five bridges and spying picture-postcard cottages along quiet country lanes. Having skirted a gorge, the trail meets the AJ Hackett Bungy centre at historic Kawarau Bridge. Celebrate your big bounce with bubbles at Chard Farm winery before being collected by shuttle.

With its magnificent backdrop of golden, rolling ranges, Central Otago is a candidate for New Zealand’s most scenic cycling destination. One of many notable trails, the 34km Roxburgh Gorge offers a spectacular ride along the Clutha River between Alexandra and the Roxburgh Dam. After riding the rocky gorge with its towering bluffs, the trail eventually emerges into an historic gold mining area. From there, riders hop on a jetboat and zip 12km downriver before re-mounting their steeds to complete the journey through to the Dam.

You may also like: Why Tasmania is perfect for ecotourists
How Australia scuba tour guides are saving the Great Barrier Reef
New Zealand Paparoa track: essential hiking tips for new trail

Why it's so easy to get around Barcelona

Experience Miami in style without spending a cent

8 reasons to take your kids to Philadelphia

5 min read • Published about 23 hours ago

The best times to visit DC might surprise you: a year-round guide to Washington, DC

4 min read • Published about 23 hours ago