Walk through England's pagan past on the country's oldest road 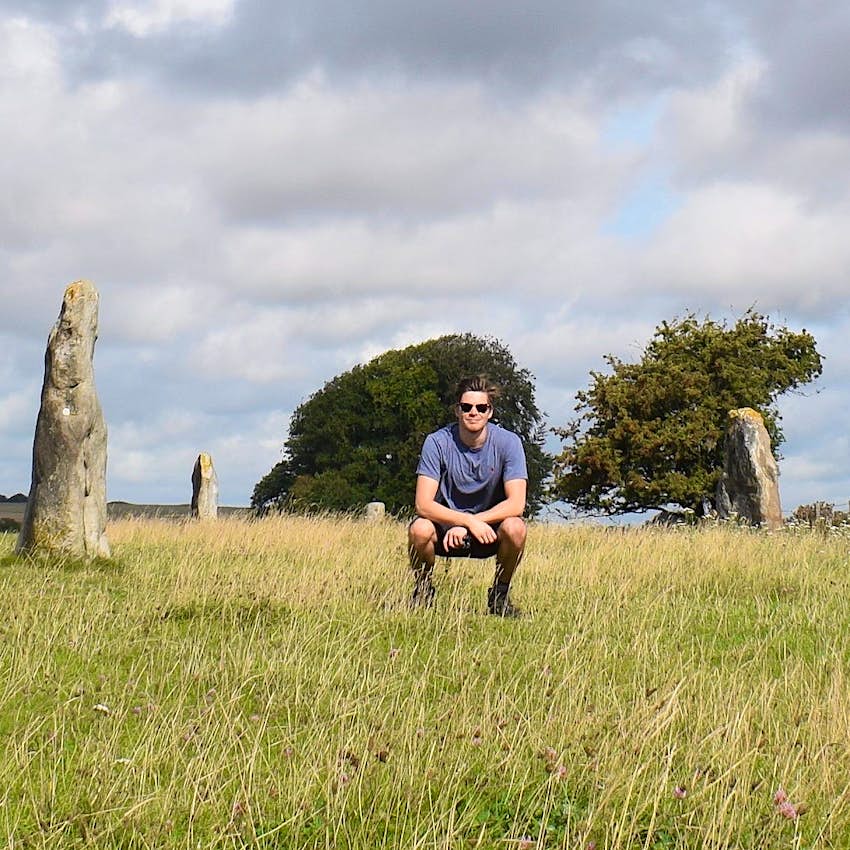 Carving its way for 87 miles across the chalk downland of southern England, the Ridgeway has carried drovers, traders, soldiers and pilgrims from the Neolithic era to the modern day. With a history dating back 5000 years, this is said to be Britain’s oldest road, and it reverberates with echoes of the pagan past. Neolithic burial mounds, striking Bronze Age hill figures and mysterious megaliths plot the path of the Ridgeway, which runs from Avebury in Wiltshire to Ivinghoe Beacon in Buckinghamshire.

The idea of spending a week escaping the pestilential horrors of the news cycle on a gentle ramble through the British countryside was, naturally, very appealing to me. More than that, though, I hoped to get a sense for what it was about this corner of the earth that led our ancestors to imbue it with such spiritual primacy – and to further explore the part of the world that I grew up in yet know next to nothing about.

So it was that I found myself bathed in the weakening light of an autumn afternoon, an ill-advisedly heavy backpack and cheap tent strapped to my back, amid the standing stones of Avebury. This is the largest Neolithic stone circle in the world, far bigger than better-known Stonehenge nearby and more atmospheric. Avebury feels like a living place rather than a tourist attraction – there’s no swanky visitor center, fewer tour buses, and the ancient stones encircle the modern village, the grass at their feet neatly maintained by grazing sheep. Just like Stonehenge, though, Avebury is an enigma, built in the third millennium BCE for some ritual purpose since obscured by the mists of time.

The Chief of the British Druid Order Philip Shallcrass, known to all as Greywolf, recounted his first impression of the stones. “The Avebury circles in their entirety felt like the welcoming arms of a great Mother”, he told me. “I suspect this numinous quality was always here, and that’s why our ancestors decided to build the henge, the hill, and the chambered tomb.”

Leaving the henge behind me, I headed for Silbury Hill, perhaps the most enigmatic of Britain’s prehistoric monuments. It’s unclear why, sometime around 2400 BCE, the people here undertook the mammoth task of excavating half a million tonnes of chalk from the nearby countryside and re-shaping it into a giant mound. This was a masterpiece of engineering, with excavations revealing systems of stakes, ditches and spiral pathways used in the hill’s construction. It probably served some ceremonial function, but gazing at it now – huge, apparently pointless, an incongruous khaki brown against the bright green fields – it seemed the ultimate expression of a spillover of creative energy, unleashed when humans abandoned their hunter-gatherer lifestyles and had time anew to devote to grand building projects.

I continued south and climbed a windswept hill to the third monument on Greywolf’s list: the chambered tomb. The West Kennet Long Barrow was built more than a thousand years before Silbury Hill, but its ceremonial use appears to have been short-lived – 46 individuals were interred here, along with pottery, jewelry and stone tools, before its long tunnel was filled in with gravel and its entranceway sealed with the same vast sarsen stones found at Avebury. I was the only visitor, but as I stepped into the excavated chamber I saw signs of recent life: bundles of dried herbs and half-melted red candles, left as offerings by visiting pagans.

Sitting cross-legged on the chamber’s grassy roof, I looked east and contemplated the journey ahead. Would the old gods smile upon me? Judging by the weather forecast, probably not. Shouldering my backpack, I walked back through the fields to Avebury. Evening was drawing in now, and the stones stretched out their shadows. A sheep emerged from behind one and blinked. I repaired to the Red Lion pub.

I woke up early the next morning and walked through the standing stones of West Kennet Avenue and past Fyfield Down, an alien landscape littered with yet more sarsen stones. They’re known as the Grey Wethers for their resemblance to sheep, but I thought the name apt for another reason as I felt a drop of rain land on my nose from the dreary skies above – a portent of things to come. I lingered in attractive villages like Hallam, where freshly thatched mushroom-cap houses bob above the bushes; I passed a wooden garden sculpture depicting two of the boxing hares who do battle in the fields here in spring.

Torrential rain fell all of the next day, with barely a tree to shelter beneath. The soporific woodlands and bluebell carpets that adorn the pages of the Ridgeway guidebooks are a feature only of the route’s eastern half. In its western range, the Ridgeway is skeletal: an exposed band of chalk protruding from the earth like the half-buried spine of some once mighty beast, picked clean of vegetation by grazing sheep and howling wind and kept a pristine white by the bleaching of thousands of years of rain and angry sun. The lonely standing stones and monolithic burial mounds only add to this bare-bones impression – the unchanging relics of a culture which used wood to symbolize the living and stone to immortalise the dead.

I rested at one such relic: Wayland’s Smithy, another Neolithic long barrow enclosed in a welcome copse of trees. Wayland, a Norse blacksmith god, is said to have shod the hooves of the Uffington White Horse, carved into a chalk hillside a couple of miles further down the trail – I trudged there now, bent double against the wind and the driving rain. From up close, you’d have no idea that it’s a horse, but aerial shots reveal it to be a masterpiece of minimalist art, its striking curves more suggestive than figurative. More than anything, it makes you wonder how on earth they did it – its proportions are perfect, but you can only really see it from a helicopter, or in matchbox miniature from hillsides several miles away. The day before, I’d walked past the Hackpen White Horse, which, with its goofy features and awkward limbs, is much more what my attempt to draw a giant animal on a hillside would look like. I slumped my bag onto the wet grass and traced a finger along the horse’s ear; the wet chalk turned to toothpaste between my fingertips.

After a wet night camping in a field, the weather perked up, but the trail became even more remote. I quickened my step as the path cut through creepy tumbledown farms, where strange faces were easily imagined in the rusting hulks of barns and, no doubt, the bodies of wayward walkers were decomposing in the grain silos. My fingers were port wine-stained from foraged blackberries, my blisters screamed in my still-wet boots, and red kites hovered in the air above my head. Extinct in England in the 20th century, these handsome scavengers have been reintroduced, and have resumed their natural occupation of cheerfully terrorizing campers and picnicking families.

After crossing the River Thames at Goring, woodland started to shelter the path more often, and as the canopy closed above me, the path became uneven underfoot, ancient roots meandering left and right like veins on an angry arm. But here too emerged clues that I was returning to civilization: a background hum of power stations and railway lines soundtracked my every step, and now the path passed through well-to-do commuter villages, not the overgrown ramparts of Iron Age hill forts. Even here, though, my immersion in the environment made every feeling more intense – not just the pain in my feet, but the smell of lavender crushed between my fingertips, the sound of the branches crackling beneath my boots. “It’s not that you go for a walk in the woods”, Greywolf had told me; “it’s how you go for a walk in the woods.” And so, chewing on that profundity, I picked up my backpack and plodded on.

1 min read • Published about 12 hours ago