A day-trip to North Korea's border

Following orders from the US soldier to line up in a row, we stood obediently looking out into enemy lines. I cast my mind back to the waiver form I’d just signed: ‘The visit to the Joint Security Area at Panmunjom will entail entering a hostile area and the possibility of injury or death as a direct result of enemy action’. All of a sudden I felt like a sitting duck, as several heavily armed and sinister looking North Korean military officers peered at us intently through their binoculars. It felt like we’d been transported into a B-grade spy film. 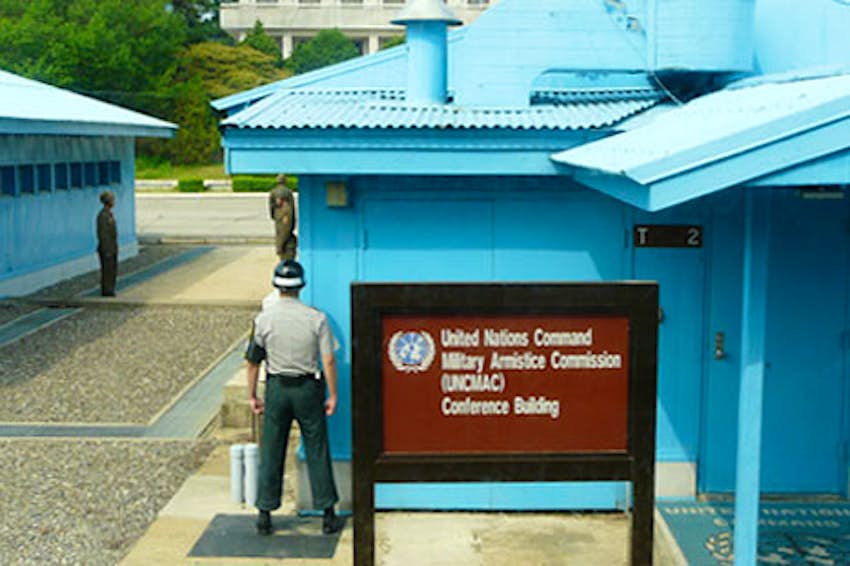 A South Korean guard stands metres from the demarcation line and his northern counterparts. Photo by Trent Holden

‘The scariest place on Earth’

Yet this was no movie set: this was what Bill Clinton described as the scariest place on Earth. Welcome to the DMZ (Korea’s demilitarised zone), one of the world’s most unlikely tourist destinations. Here you’ll encounter the military demarcation line that divides South Korea from its long estranged bad-boy brother, North Korea. These two mortal enemies, still technically at war, eyeball each other across the border, as they’ve done since the Korean war ended in stalemate nearly 60 years ago.

The drama along the border is only a few hours’ bus ride from Seoul, and can only be visited as part of an organised tour. I was travelling with the Panmunjom Travel Center (www.panmunjomtour.com), who arranged a North Korean defector to answer our questions about life on the other side.

I’m not sure what I was expecting (perhaps someone in a short-sleeved zip-up Kim Jong Il suit), but it took me by surprise that the defector was a woman. Aged in her mid-30s, she had an air of elegance. There was also a look of incredible sadness about her, and a steely look in her eye as she spoke about the hardships of living in North Korea. Escaping Pyongyang not only involved a series of pay-offs to brokers, swimming for miles in rivers before escaping into China, but also, like so many other female defectors, being married off to a Chinese man she had never met. Eventually making it to South Korea years later came at the high price of being alone, away from her baby, family and loved ones - and not being able to contact them to say she’s alive. Yet she was one of the lucky ones.

Several interesting stopovers along the way made for a good prelude to reaching the DMZ. We plunged down into the depths of the Third Infiltration Tunnel (one of four secret tunnels dug into the south by the North Koreans, who claimed they were coal mines), visited a squeaky clean train station that awaits the day trains can continue on to Pyongyang, and a lookout point with sweeping views into North Korea. 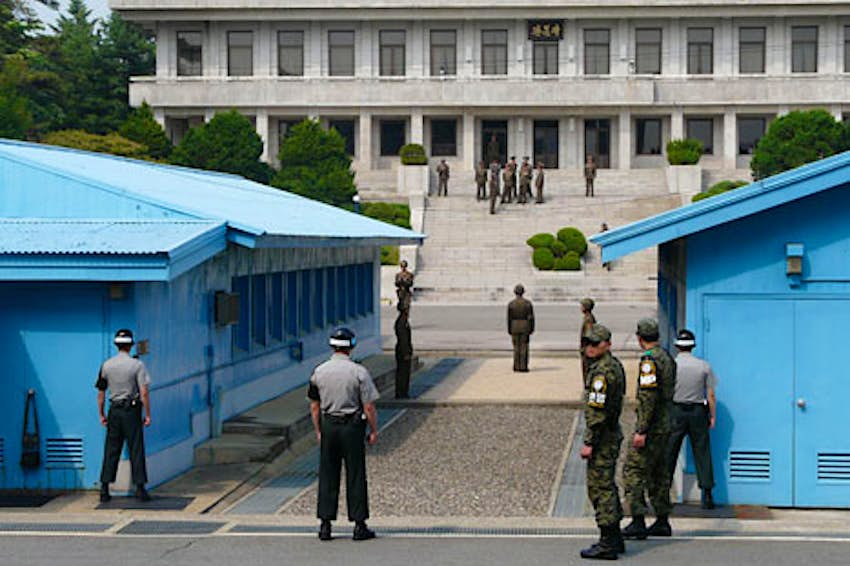 Alert on the border as high-ranking DPRK officers tour the site on the north side. Photo by Trent Holden

But it was the JSA (Joint Security Area) at Panmunjom that everyone was here to see. Arriving at Camp Bonifas, the UN command military post just before the border, a US soldier boarded our bus to check our passports and lay down some ground rules. No pointing, waving or any form of communication with the North Korean soldiers, no umbrellas, no pens and no taking off jackets or anything else that could be misconceived as brandishing a weapon.

But perhaps the most interesting rule was no ripped jeans. Apparently images of scruffily dressed Westerners have been used by North Korea in the past as propaganda to show that Americans can’t afford new pants!

After the briefing, we were given the all-clear to head on to the military demarcation line. The short drive took us through the most pristine forest in South Korea, home to varied birdlife and animals not found elsewhere in the country. At the border, we encountered the famous bright-blue meeting rooms that run either side of the demarcation line. On our side, the ROK (Republic of Korea - aka South Korea) soldiers stood statue-still on either side of the building wearing helmets and Ray Bans, assuming a Taekwondo position with clenched fists held either side of their body. 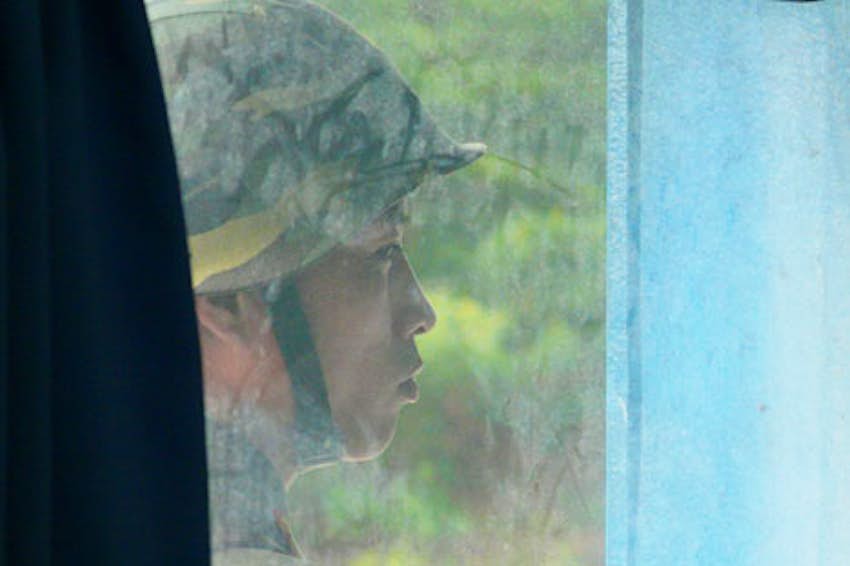 Meanwhile on the DPRK (Democratic People’s Republic of Korea - aka North Korea) side, soldiers marched with swinging arms as a delegate of high-ranking DPRK officers toured the site. We watched on with intrigue as officers with absurdly high brimmed hats posed for photographs. Something that drew my attention was movement in one of the meeting rooms occupied by the DPRK. Here I noticed the curtains being repeatedly slightly opened before being shut again, as someone was spying on us in almost comical fashion.

Then it was time for us to head into the UN checkpoint building. As we roamed the room, delighting in standing on the North Korean side of the border, and posing for photographs with the unflinching ROK soldiers, the DPRK soldiers would attempt to psyche us out as they stood up right against the window peering in with dirty looks and making gestures like cracking their knuckles at us in disdain. It made for fantastic theatre, and a memorable ending to the trip. 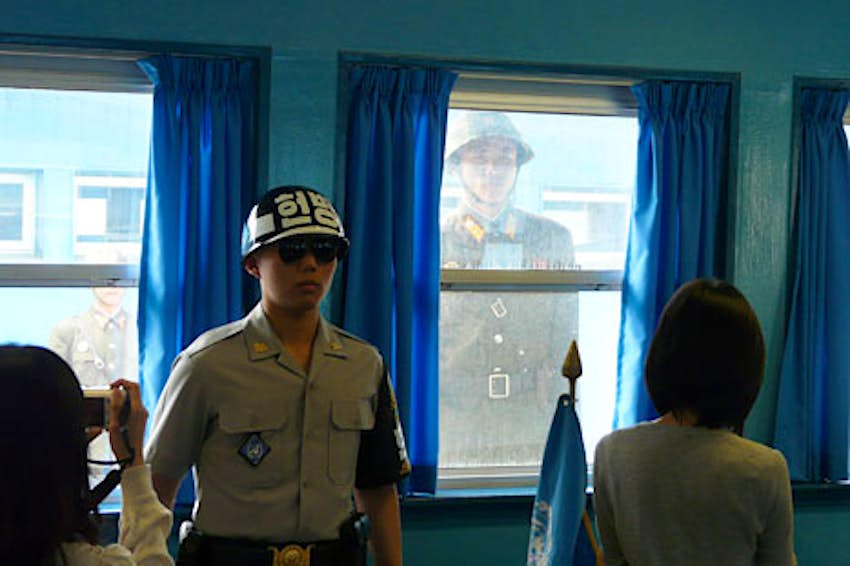 There are a number of companies that arrange tours to the DMZ, but it’s important to choose one that includes a visit to Panmunjom and the JSO - undoubtedly the highlight of the trip.

The most popular choice of company is USO associated with the US military, but Panmunjom Travel Center is a great choice to meet a North Korean defector (but take note they only appear if there are 20 people in the group). You’ll need to sign up at least one week in advance, and expect to pay anywhere from US$80 to US$100 for the full day tour.

This article was first published in July 2012 and was refreshed in January 2013. 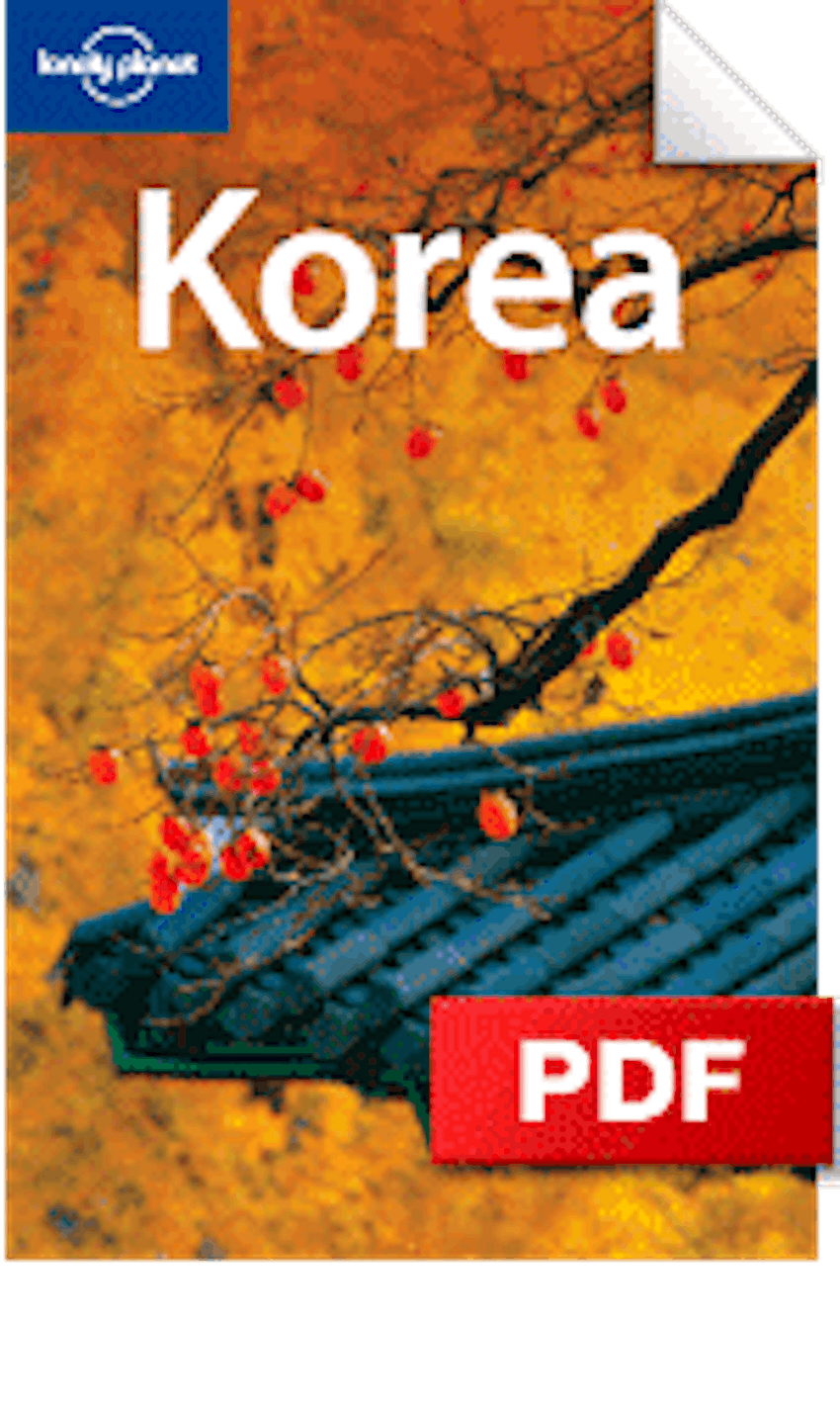 From the mind-boggling capital of Pyongyang to holy Paekdusan mountain, Lonely Planet's PDF chapter on North Korea can help you plan a visit to the world's most isolated state. Download it now.

The most epic surf spots in the US according to pros

You can now apply for Estonia's new digital nomad visa

A love surprise: perfect romantic getaways you hadn't thought of…

How to uncover closed-door restaurants when travelling