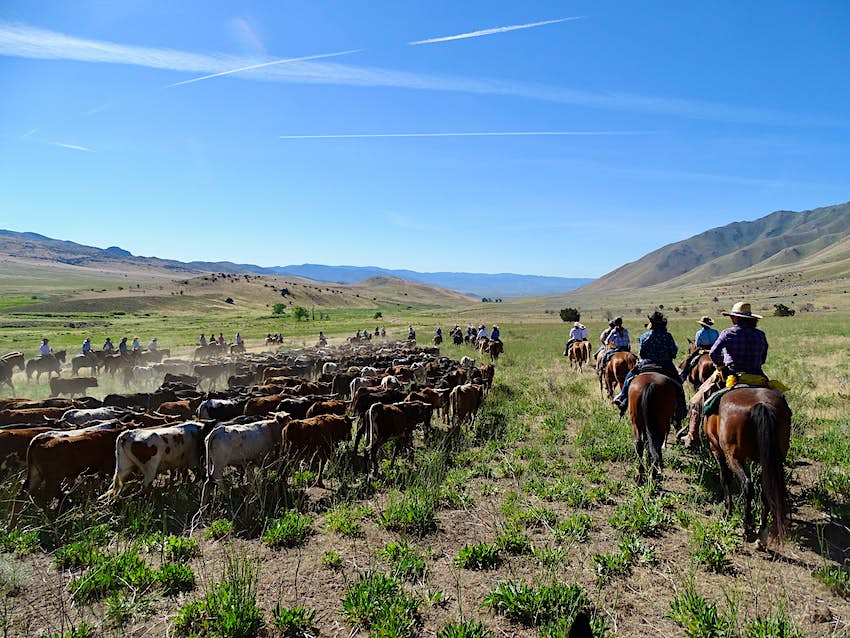 Suddenly, a few cattle escaped, and then all hell broke loose. Horses were running, animals were escaping, the cowboys were shouting instructions, and my steed, Guru, decided it was time to sprint.

I was petrified, so I held on, shut my eyes, and screamed as Guru ran his heart out. I pulled the reins as hard as I could to no avail. He finally slowed down, but – to my chagrin – the ordeal was witnessed by a cowboy who told me that closing my eyes and shrieking wasn’t the most productive response. Point taken.

As I nursed my ego, I contemplated the fact that this was day one of a five-day cattle drive. It wasn’t even the real deal. As I laid down in my tent that night, I pondered what on earth I was doing in the middle of the Nevada desert.

I pride myself on being adventurous. Daring, in fact. As an only child, I grew up in the Philadelphia suburbs as my mother’s “girl” and my father’s “boy,” which resulted in an open-minded adult who will try anything once – including participating in the Reno Rodeo Cattle Drive in Nevada.

As a city girl, I had limited experience in managing horses. At best, I had ridden a pony at the circus, but I resolved to at least look the part. I scoured thrift stores for bootleg jeans, plaid shirts, and boots that would make any cowgirl proud. I packed and headed out west without a clue just how “western” my trip would quickly become.

After landing in Reno, I headed to the cattle drive camp. Filled with anticipation, I watched the landscape gradually change as paved roads gave way to gravel. Urban civilization disappeared as fast as my cell phone coverage. I arrived in the middle of the desert without electricity or running water – luckily, there were portable toilets and makeshift showers. Being surrounded by the beauty of rural Nevada was peaceful.

Eventually, the time came for me to meet my horse. Before the drive, I answered questions about my height, weight, and riding skills (nonexistent, remember?) so they could match me with a horse. I then met a brown steed named Guru. Determined to become friends, I stroked his mane and talked to him gently. We were going to get through this together.

First day on the cattle drive

Drivers were instructed that during the ride, our goal was to create a living fence to contain the cattle. During a practice run, we assembled our barrier with ease, and it was time to let the animals go. Panic set in. I was barely used to riding a horse, and all of a sudden, I was supposed to keep an eye on cattle?

The herd stormed towards us. They tested their boundaries but then seemed quite content to be contained within our makeshift fence.

The morning after, I was woken up by the loud clanging of a cowbell. More cowbell? Less, please. I had an eight-hour day ahead of me. On a horse. While wrangling cattle. The pit of my stomach felt miserable.

Each hour of riding got hotter, drier, and dustier. I lived for our lunch and water breaks, but as I looked around, people were enjoying their time. Newlyweds, lifelong friends, and groups of relatives had all chosen this as a vacation, which baffled me.

On my riding team was a group of four ladies, the “59ers,” who were all born in 1959. According to Susie Askew, “The cattle drive [is] a great way to spend time with friends...four old friends celebrating friendship and the love of horses.” Another 59er, Julie Von Tobel Gleason, relished in how she “loved setting up camp, the girlfriend time, and new friendships.”

One of the most touching moments was the memorialization of Ann Welch, who had participated in the drive for ten years. Her husband, Greg, and their son, Mike, brought Ann’s ashes to be spread in the wilderness. Greg reflected, “Annie will forever be at peace, the happiest cowgirl on earth, forever in the Nevada desert.” It’s a moment that neither I, nor any of the other cattle drive participants, will ever forget.

Through these interactions, I formed bonds with my fellow drivers, and my mind began to change. The people spoke to my heart through their kindness as they conveyed how much they enjoyed the simplicity of ranch life. My heart softened as I began to understand the Wild West culture amidst the Nevada landscape.

The last day started bittersweet. I had made friends and learned a bit about myself, but nothing had prepared me for what lay ahead as we readied to venture from the desert into the city of Reno.

Our journey involved traversing steep slopes with loose stones. That trust that I had built in Guru kicked in as I knew he would do his best to keep us safe as I concentrated heavily on riding while herding steer.

When we reached Reno, police escorts waited to lead our cattle-cade. Then I saw the unexpected. Families lined the streets. Children waved. Onlookers took photos as we paraded through the streets.

I realized I was a part of something bigger than myself. A tradition. An event that the people of Reno anticipated year after year. There was an air of excitement that made any former discomfort fade away.

As we strode through the streets, I couldn’t help but smile, wave, and relish in the fact that I was involved in a communal effort. The entire city of Reno was seemingly one – riders, horses, cattle, bystanders and me, too.

We cheered as we entered the rodeo arena. The cattle had reached their end point, yet I felt an overwhelming wave of sadness. The drive was over. I would have to say goodbye to my new friends and my old horse, Guru. The feeling of a never-ending, dusty purgatory had long given way to a new sense of belonging – a feeling of pride and kinship.

Some experiences are vastly different from our perceived norms, and I learned to be open-minded about new things while creating friendships along the way. The west may have been won in the 1800s, but there is no doubt that it took a five-day cattle drive for the west to ultimately win my heart.