Ljubljana: a small but beautiful capital

Ljubljana, Slovenia's biggest city (say lyoob-lya-nah – the j’s are mostly silent), also happens to be one of Europe's greenest and most liveable capitals. It’s conveniently set up for visitors too – most of the city’s top attractions are clustered in a compact pedestrianised area around a bend in the pretty Ljubljanica River, perfect for casual wandering. 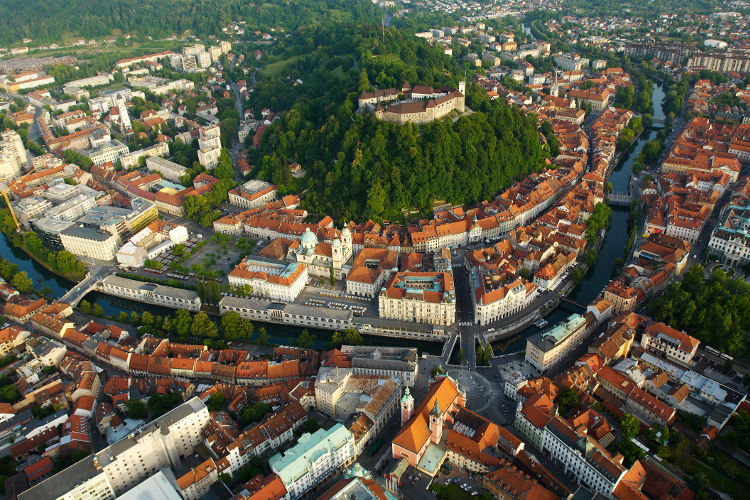 Ljubljana seen from the air. Image by Tomo Jeseničnik / www.slovenia.info

Visitors traditionally begin their exploration of Ljubljana by heading up Castle Hill to check out the sweeping views of the city from Ljubljana Castle’s watchtower. There are several ways to reach the castle, with the easiest (and most fun) being a 70m-long glass-walled funicular that leaves from the Old Town just behind Vodnikov trg. Alternatively, you can hike the hill in 20 minutes from one of several paths that run up from the Old Town. Along with the usual historical exhibitions, there are a couple of excellent restaurants within the castle, so you might want to time your visit to coincide with lunch. 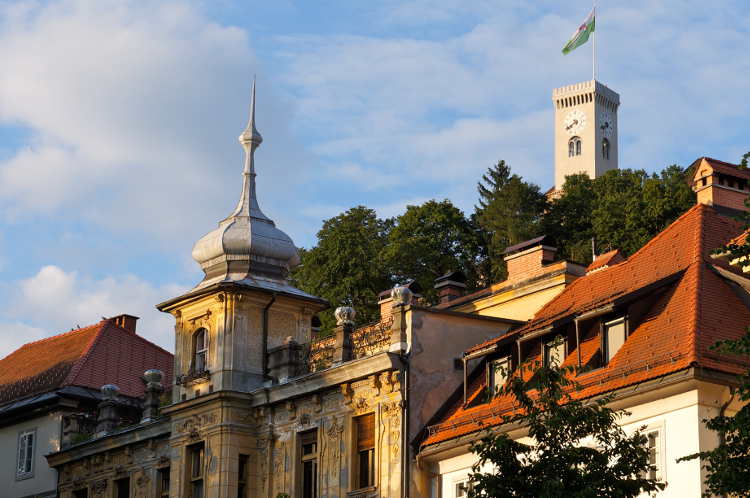 Between Castle Hill and the Ljubljanica River is the city’s Old Town, defined by three ‘squares’, which are actually more like narrow, cobbled streets. Mestni trg is dominated by the Town Hall and, in front, the Robba Fountain, decorated with three titans representing the Sava, Krka and Ljubljanica rivers. Stari trg, further south, is the true heart of the Old Town, lined with 19th-century wooden shop fronts, quiet courtyards and cobblestone passageways. Gorni trg, the southeastern extension of Stari trg, is the quietest and most evocative section of the Old Town, with some buildings dating to the medieval period.

At Ljubljana’s heart is the highly photogenic Prešernov trg, just a short walk from the Old Town across the three-pronged Triple Bridge. The square is flanked by beautiful historic architecture, including the salmon-pink Franciscan Church of the Annunciation, and holds a monument to Slovenia's greatest poet, France Prešeren, after whom the square is named. Triple Bridge was designed by Slovenia’s master of early-Modern minimalism, Jože Plečnik, an architect and urban planner who almost single-handedly transformed the city, creating elegant new structures and remodelling almost everything else, including the river banks. 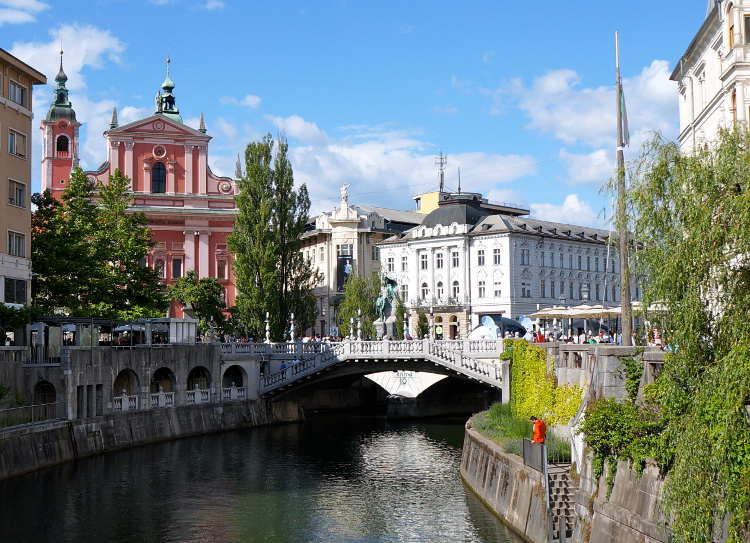 Looking back across Triple Bridge to the east is a two-tier arched colonnade that was designed by Plečnik and is now filled with mouthwatering food vendors. Behind it is the Central Market area where you can shop for delicious fresh produce at the fish market, covered market and open-air market. A modern footbridge crosses the river halfway along the colonnade, but Ljubljana’s most famous bridge is at the far end – the evocative and much-loved Dragon Bridge, dating from the turn of the 20th century. 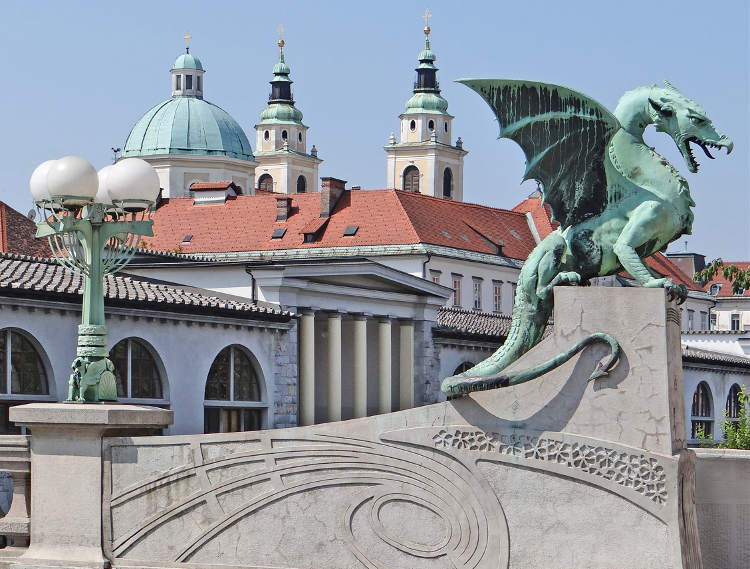 One of the four dragons on Dragon Bridge. Image by Jean-Pierre Dalbéra / CC BY 2.0

Ljubljana is home to many of Slovenia’s best restaurants. In addition to the castle’s excellent Gostilna na Gradu, which specialises in traditional dishes using only organic, locally sourced ingredients, try Pri Škofu, about 10 minutes south of the centre and a favourite with university students for its good-value ever-changing menu. Closer to the centre and ideal for lunch, Julija serves mainly Italian and continental dishes while sometimes giving them an Asian or other twist. Fish lovers will want to visit Ribca, a casual, waterfront restaurant close to the open-air market.

The city has a vibrant cafe scene, and on a sunny afternoon the best place to be is sitting at an outdoor table at one of the many cafes that line the banks of the Ljubljanica River. When the sun goes down action transfers to numerous hotspots around town, including leafy, intimate Knafliev prehod, home to a handful of trendy bars, and Metelkova Mesto (www.metelkovamesto.org), a former army garrison to the north of the city centre that was taken over by squatters in the 1990s and is now home to unusual art installations and several alternative clubs and music venues. 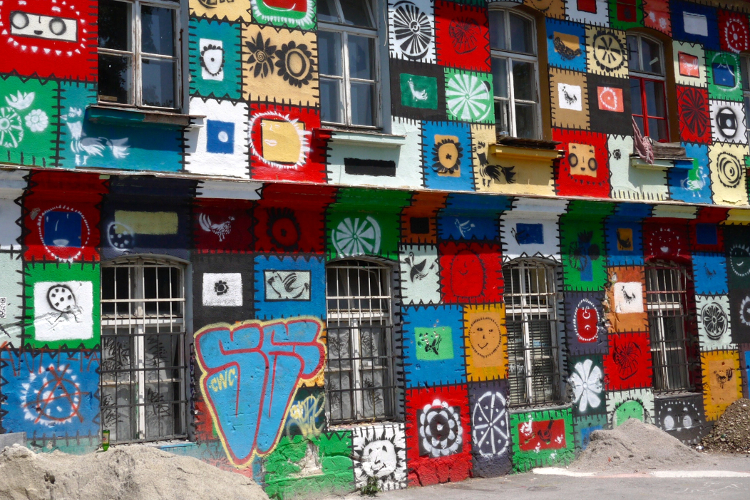 Accommodation in Ljubljana runs the gamut from good-value hostels to budget hotels and luxury palaces. At the top end, the Antiq Palace Hotel & Spa occupies a 16th-century townhouse near the historical centre, and offers every amenity imaginable.

Cubo, in a more modern part of town, is a recent boutique option, with tasteful minimalist design and an excellent in-house restaurant.

Celica Art Hostel in Metelkova Mesto offers dorm beds and a few apartments in the cells of a former prison, which have each been revamped by different artists and architects.