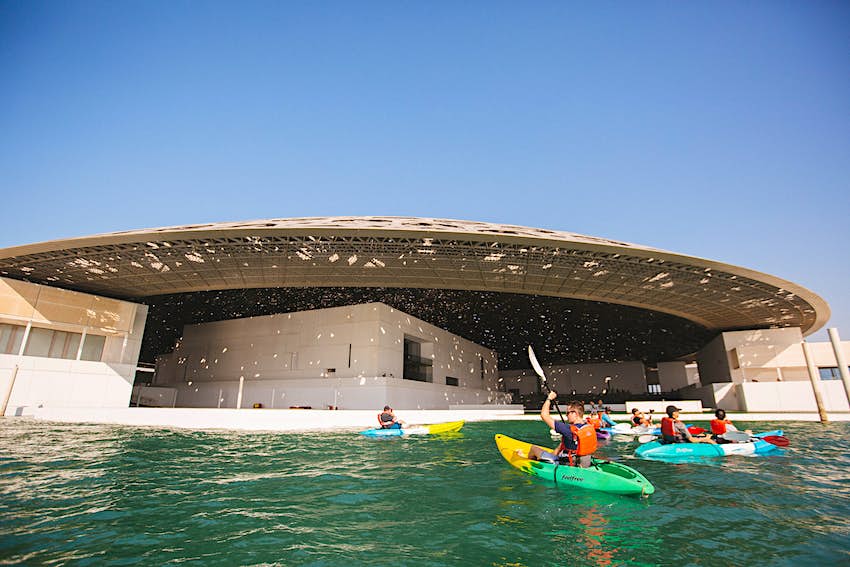 "Sea Hawk and Louvre Abu Dhabi decided to launch tours at sunrise and sunset as this is a popular time for recreational activities within the region," Nikki Andrew, Sea Hawk’s Director of Sales and Marketing, told Lonely Planet Travel News. "At dusk and dawn the skies around The Louvre transform to include dusky pinks and vibrant orange hues. It makes the perfect background to take in the Middle East's most spectacular museum."

Designed by Pritzker Prize–winning French architect Jean Nouvel, Louvre Abu Dhabi opened to great fanfare at the end of 2017. The gallery, which bills itself the Middle East’s first ‘universal museum’, contains a world-class collection that traces humanity's artistic achievements from the Neolithic up to the present day grouped by theme and time instead of by geographic location.

Unsurprisingly, the Louvre Abu Dhabi building itself is a work of art, and the geometric domed roof is a particular highlight. The design layers lattices of nearly 8000 metal stars, which filter sunlight to create a ‘rain of light’ that scatters across the interior, meant to evoke the feeling of walking through the labyrinthine alleyways of the medina, the ancient neighbourhoods found at the heart of cities across the Middle East and North Africa.

In addition to its daily tours, Sea Hawk also runs full moon kayaking sessions, so you can see the Louvre Abu Dhabi’s gleaming white exterior glowing under the bright lunar light. The company provides life jackets, guides, water bottles and changing areas, and the tours are open to all fitness levels ages six and older.

First time Dubai: top tips for your first visit to the city of gold
Top 10 things to know before visiting Dubai
Taste of Dubai: the city’s best Emirati eats