Mexico City  is a booming metropolis with cosmopolitan restaurants, world-class museums, and ultra-modern architecture popping up almost daily. It’s hard to believe that this mega-city was built directly on top of what was once the capital of the Aztec Empire.

Behind the skyscrapers and bourgeois cafes are hundreds of years worth of history and culture just waiting to be explored. Here’s where you should look for it. 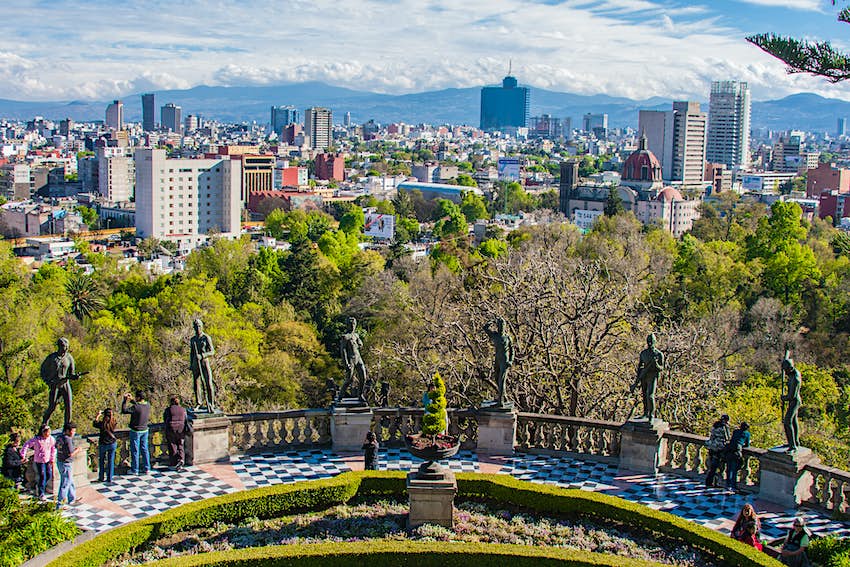 Teotihuacán is the most famous Meso-American site near Mexico City. While no one knows who really built Teotihuacán, archaelogists are certain that the Aztecs began inhabiting the city in the 13th century.

As you drive into the ancient city you’ll spot the enormous Pyramid of the Sun. It’s the third largest pyramid in the world at 210 feet. You can climb the steps to take in the same views that the Aztecs had over 700 years ago.

If there’s only one Aztec site you visit in Mexico City, it should be Teotihuacan. It’s easily accessible by tour, taxi, or bus.

Tenochtitlán was the capital of the Aztec Empire. It was a huge city, even back then, and was located on an island in the middle of Lake Texcoco. When the Spanish came to Mexico, they filled in most of the waterways and began building what is now modern day Mexico City.

In 1978, archaeologists excavated parts of the city and discovered a large pyramid which we now know as Templo Mayor, or the main temple. For a mere 70 pesos, you can now walk amid these ruins and visit one of the best Aztec Museums in all of Mexico.

The Plaza of three cultures is the main square in the Mexico City neighborhood of Tlatelolco and is an incredible place to experience the three main cultural periods of Mexico City - Aztec, Spanish Colonial, and Mexican independence.

In the center of the square are the ruins of the temple of Tlatelolco as well as the largest Aztec market in the entire region. Beside it sits the Spanish church, Templo de Santiago, which was built using stones from the Aztec temple.

The square has a tumultuous past and in 1968 was the location of a student demonstration against the government and subsequent massacre of many of those students.

The Ancient City of Cuicuilco

Just south of the city center in a neighborhood called Tlalpan, is a little known archaeological site called Cuicuilco, which means “place of songs” in the Nahuatl language.

Just like Teotihuacán, the original inhabitants of this city were not Aztecs. While the buildings date back to as early as 1400 BC, it is likely that the Aztecs only began living in this city around the 14th century.

The museum within the park is a fascinating place where you can learn more about the Aztec culture as well as the many Meso-American people that came before them in this region.

About 45 minutes North of the city in Mexico State is the small town of Santa Cecilia. This little local place contains one of the best remaining examples of Aztec architecture in Mexico.

Most of it was taken apart and used to build churches when the Spanish arrived, but what’s left is well worth a journey for the Aztec history buff. Archaeologists have discovered that this location was a political and religious center during Aztec times.

It can be a difficult place to get to unless you rent a car or hire a driver for the day from the Zocaló.

If you’re interested in learning more about the daily lives of the Aztec people, Calixtlahuaca is the place to come. It’s a bit of a trek from Mexico City, but worth the trip.

Just outside of Toluca, the capital of Mexico State, Calixtlahuaca is one of the most well-preserved residential Aztec areas. The archaeological zone has a several temples, pyramids, and houses that you can walk around and read more about.

The Museum of Anthropology  is the largest and most visited museum in the entire country, and so it should be. The exhibits and explanations are in both Spanish and English and the amount of historical hardware on display is almost mind-blowing.

The Museum of Anthropology is a perfect place to end your tour of Mexico City Aztec history. After visiting some of the different sites around the city and surrounding state, a trip to the Museum of Anthropology will make a little bit more sense. You’ll also be able to see some of the relics that have been removed from all of those different locations and placed for all to view in the museum.

See the most famous French architecture replicated in China

Rent a private island for 'Friendsgiving' for just $50 per person

Ask LP: I want to travel for Thanksgiving - is it responsbile right now?

3 min read • Published about 3 hours ago