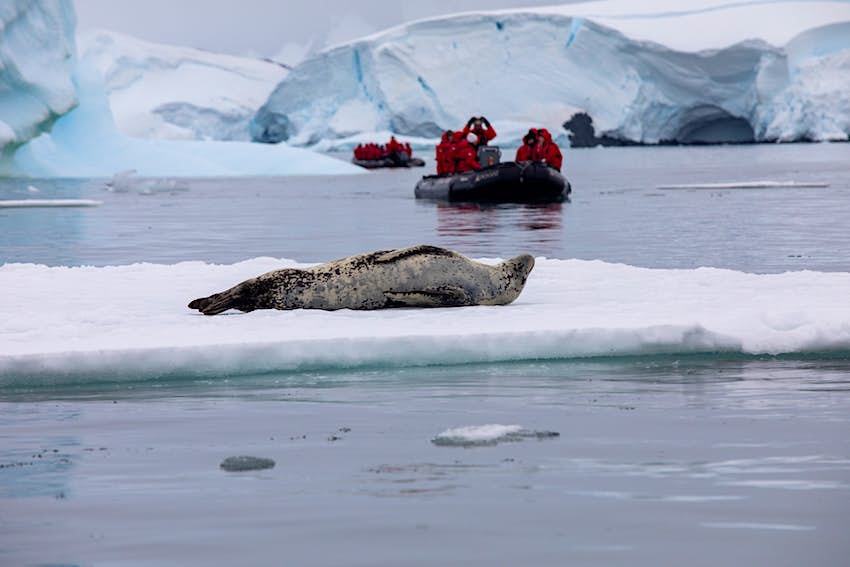 Caryn B. Davis travelled to Antarctica in January this year, fulfilling a life-long dream. Post-pandemic, people may be asking how to make their bucket list more sustainable. Can travelling to this pristine land fall under that category?

The Antarctic is one of the last undisturbed places on the planet. Human beings have only been traversing this isolated landscape for a mere 200 years since it was discovered in 1820. Unlike many other locations where our presence has had a negative impact, Antarctica still remains virtually unspoiled.

It is our most unpopulated continent. It has with no permanent residents or indigenous cultures, only a scientific community of about 1,000 people in winter, burgeoning to approximately 4,000 in summer. With mind-blowing scenery, opportunities to get close to wildlife, and a chance to experience what few have and ever will, Antarctica has become a coveted destination. But is travel there sustainable?

The history of tourism to Antarctica

Tourists arrived in Antarctica in 1966 when Lars-Eric Lindblad, a Swedish-American entrepreneur and explorer, led the first group onboard a charted Argentine naval ship. Three years later, he commissioned his own vessel, the MS Lindblad Explore, and spent the next 20 years taking passengers on educational tours, pioneering what became “expedition cruising”. With the influx of commercial operators, came the need to regulate the industry to protect scientific projects, historic sites and monuments, wildlife and the pristine landscape. In 1991, the International Association of Antarctica Tour Operators (IAATO) was established “to advocate and promote the practice of safe and environmentally responsible Antarctic travel”.

IAATO works in concert with the Antarctic Treaty System. Antarctica is not owned by one nation, but rather governed by this treaty, which was set up to foster scientific investigation. It mandates “Antarctica shall be used for peaceful purposes only”, all scientific results must be publicly shared, and there shall be no military activity, no nuclear testing, or territorial claims to the land. Since the signing of this treaty on December 1, 1959 in Washington D.C. by 12 countries, an additional 42 nations have become part of the system. To further guarantee Antarctica’s health is retained, the Protocol on Environmental Protection was added to The Treaty. Both governmental and tourism entities are bound by it.

“IAATO plays its part proactively by following Antarctic Treaty rules, as well as creating our own comprehensive set of guidelines for our members to ensure visitors have an enriching and educational experience without impacting the environment,” says Janeen M. Haase, director of Governance & Finance for IAATO. “We see going to Antarctica as a privilege, not a right.”

So what do we, as conscientious travelers, need to consider when looking for a tour operator that values penguins over profits?

There are many different types of vessels and sizes from hands on sailing yachts, to polar research boats, to major cruise lines, to small and high end luxury expedition ships. Most depart from Argentina or Chile, though some leave from Australia, New Zealand and Tasmania, and occasionally from South Africa. Prices vary, but a trip to the bottom of the world can average $3,000 (€2693) to $25,000 (€22,446) depending on how lavish your accommodations are, the time of year you travel, the length of the voyage, the onboard amenities, and if airfare, charter flights, alcoholic beverages and gratuities are included or not. Some companies offer last minute discounts on undersold trips, while others have dormitory style cabins, which can defray costs. A good place to start when ship shopping is the IAATO website. While membership is not compulsory, tour companies in this directory follow the strict protocols.

Passenger size does matter in terms of your experience. Ships carrying 500 visitors or more are not permitted to go ashore while ships with fewer than 500 can land at approved sites, but only one ship at a time. There is also a cap on how many ships can visit the same site on the same day. As an additional layer of protection from overuse or disruption to historic structures and wildlife, only 50-100 people are permitted on land at a time, and for every 20 guests onshore, there must be at least one crew member. Permission to visit scientific bases must be obtained and is not automatically granted.

Before heading ashore, passengers attend mandatory briefings on where they can and cannot walk always being mindful of damaging nests, terrain or vegetation. They wash their clothes, boots and gear before and after landings to prevent the spread of foreign matter or disease. Wildlife always has the right of way, and a distance of at least 15 to generally 300 feet must be maintained depending upon the species, and whether they are being viewed on land or water. Of course it goes without saying that no food or drink can be taken ashore, no littering, no smoking, no feeding the animals, and nothing can be removed, not even one tiny pebble, so don’t even think about it.

While all tour operators are encouraged by IAATO to offer an educational component, the richness of that program varies, as does the quality of the guest lecturers, and expertise of the onboard expedition team. When comparing the comfort of a ship, the accommodations, the cuisine, the destinations visited and the price point, these two factors will make a real a difference in your Antarctic experience. This is where all tour companies are not created equal.

On a recent cruise I took to Antarctica with Abercrombie & Kent (A&K), we had daily enrichment lectures from renowned historians, scientists, naturalists, ornithologists and geologists on a diverse range of topics. We also heard personal accounts from experts who have been coming to Antarctica for over 40 years, making hundreds of trips to scientific bases, often wintering over.

“Education was a really big part of this voyage. So whilst it’s called a cruise there is much learning about the continent, and not just seeing it first hand, but attending lectures from really competent people,” said A&K passenger Martin Mackay from the United States.

As passengers, we took for granted the ease in which the expedition team safely manoeuvred us in out of the zodiacs for shore landings, and the skill it took them to navigated the small boats through moving sea ice, even when the weather turned unexpectedly snarly.

Suzana Machado D'Oliveira, the expedition director for A&K, who has made over 300 trips to Antarctica, has worked with the same expedition staff for over 20 years. She believes what will impact tourism as it grows will be the quality of the onboard teams. “I can confidently say we can do landings in conditions other companies can’t and still operate safely. Everybody has been coming here for many years so our individual and collective experience is enormous,” said D'Oliveira. “You can’t train people like us fast enough to keep up with the increase in tourism.”

Since its inception IAATO has recorded the amount of ships, voyages and passengers that have visited the Antarctic, how many people have gone ashore, and what activities they were engaged in. The pre-pandeimis projections for the 2019/2020 season estimated 432 voyages with 59,367 people landing. While this will change, these figures were a drastic increase from the first documented season in 1992/1993, which saw 59 cruises with just 6,704 passengers. Yet, as of right now, our tourism footprint is still minimal. Climate change is the more pressing issue.

“What people do in other places on this planet has a way, way bigger impact than the tourists that come here do,” said D'Oliveira who attends IATTO’s annual meetings on A&K’s behalf, and is on IATTO’s Tourism Growth committee.

Dr. James McClintock, a SCAR Medal recipient for Education and Communication, an author, professor, and a marine scientist at Palmer Station in Antarctica where he has been studying the effects of climate change, was at first conflicted about tourism to the White Continent. “Would tourists damage the fragile ecology of such a place? Would tourist visits to the research stations be disruptive to the ongoing science? Now, after ten years serving as lead lecturer for the Antarctic Communicating Climate Change cruise for A&K, I can say with conviction the benefits far outweigh the negatives,” said McClintock. “Yes, there is a carbon footprint to cruises to Antarctica. But, I believe the guests who listen enthusiastically to the lectures on climate change, and its impact in Antarctica and elsewhere offset this cost. They return home ambassadors of Antarctica and more appreciative of the urgent need to address global climate change by reaching out to their elected representatives on this issue.”

Zezinho Santos, a passenger with A&K from Brazil believes “the best sustainability action cruises can take is to give people awareness, knowledge and comprehension of the effort it takes to maintain Antarctica as it is.”

The eternal lure of icebergs: fulfilling a life-long dream of visiting Antarctica
Here's how to experience Antarctica in a single day
6 bucket list destinations at risk of disappearing due to climate change

5 min read • Published about 20 hours ago