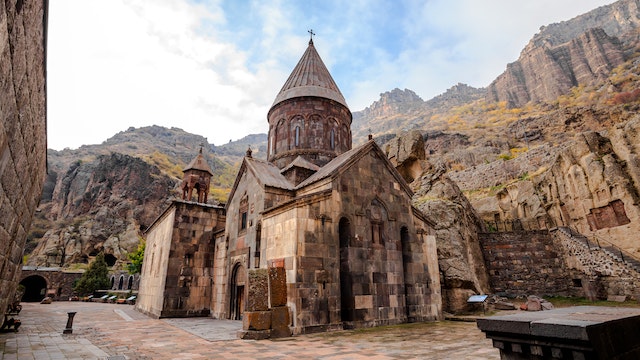 Named after the lance that pierced Christ’s side at the crucifixion (a shard is now on display at the museum in Etchmiadzin), this World Heritage–listed monastery is carved out of a cliff alongside the Azat River Gorge. Founded in the 4th century, the monastery's oldest chapel dates back to the 12th century and its tremendously atmospheric Surp Astvatsatsin (Holy Mother of God Church) dates from 1215. The cathedral features wonderful carvings and its surrounding chapels make for terrific exploring.

Outside Surp Astvatsatsin, above the south door, is a coat of arms of the family of the Zakarian prince who built it. The theme is a common Near Eastern one, with the lion symbolising royal might.

On the left-hand side of the gavit (antechamber) are two entrances to chapels hewn from the rock in the 13th century. One contains a basin with spring water, khachkars and stalactite decoration. The second includes the four-column burial chamber of Prince Papaq Proshian and his wife, Hruzakan. The family’s coat of arms, carved in the rock above, features two lions chained together and an eagle.

Outside, steps to the left of the entrance lead up the hill to a 10m passageway with carved khachkars. This gives access to a 13th-century burial vault that was carved out of the raw rock. Its proportions and acoustics are quite amazing. In the far corner is an opening looking down on the church below.

Behind the church are steps that lead to some interesting monastic cells and more khachkars. Outside the monastery, next to the stream, is a matagh (sacrifice) site that is used on Sundays after the morning service. A choir usually sings at that service, too.

As you approach the monastery, look to the left up the hill for caves housing monastic cells built by monks. Trees here are often dotted with strips of cloth, as are trees on the other side of the monastery near the river. It is said a person can say a prayer or make a wish and tie a strip of cloth to a tree near the monastery to make it come true.

During summer, the ramp to the monastery is crammed with vendors selling souvenirs and food; you should be able to grab a snack of sweet sujuk or dove-shaped gata (sweet cake).