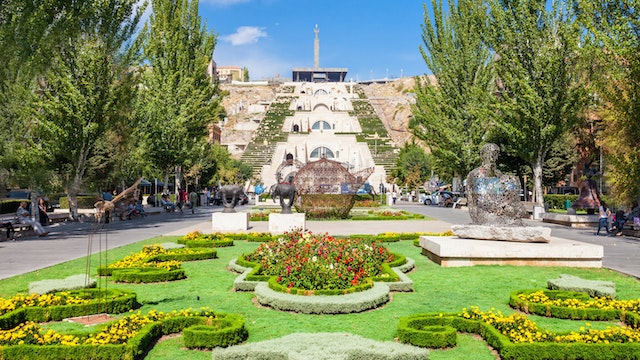 Housed in a vast flight of stone steps known as the Cascade, this arts centre is one of the city's major cultural attractions. Originally conceived in the 1920s by Soviet architect Alexander Tamanyan as part of his plan to modernise Yerevan, work on the monumental structure finally commenced in the 1980s but stalled after the 1988 earthquake. Eventually, Armenian-American philanthropist Gerard Cafesjian came to the rescue, funding its completion and transformation into a multi-level contemporary arts space.

The centre's two external garden galleries and five exhibition halls are accessed via an internal escalator. Next to the escalator are platforms where artworks from Cafesjian's personal collection of 20th-century and contemporary sculpture and furniture are displayed. There's a decidedly quirky theme at work here, with pieces such as Studio 65 for Gufram's Marilyn 'Bocca' Lip Sofa, Giorgio Laveri's Lipstick and Richard Cresswell's Butterfly Seat three of many works catching the eye on the trip up and down. These and the garden galleries, which feature recessed fountains, modern khachkars (stone steles featuring carved crosses) and contemporary sculptures, can be visited free of charge. Internal exhibits are free, except for one temporary exhibition which costs AMD1000.

On the ground floor, the large gift shop is one of the best places in the city to source quality souvenirs. There's also a welcoming and well-stocked art library with a small children's section.

In front of the Cascade, a sculpture garden features three huge bronze works by Colombian-Italian sculptor Fernando Botero: Cat, Roman Warrior and Woman Smoking a Cigarette. These sit alongside a whimsical wrought-iron teapot by Joana Vasconcelos, a bright blue kiwi by Peter Woytuk and plenty of other works. The two streets edging the park are home to cafes, bars and restaurants with plenty of outdoor seating.

The steps themselves make for a popular place to catch a sunset while (discreetly) swigging a bottle of wine.