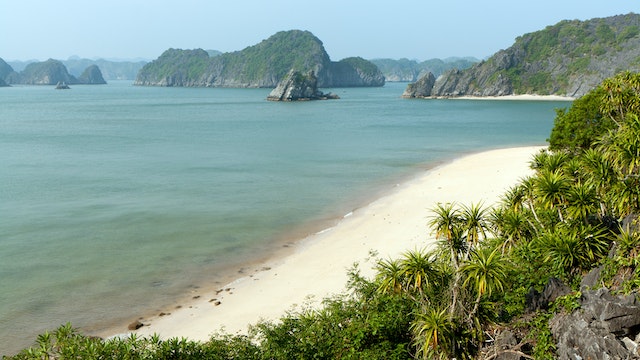 Lying to the south of Halong Bay off the north-eastern coast of Vietnam, the 300-or-so karst islands and limestone outcrops of Lan Ha are just as beautiful as those of its superstar neighbour, but feel more isolated and untouched. Lan Ha also has the additional attraction of numerous white-sand beaches, which aren't found at Halong.

Geologically, Lan Ha is an extension of Halong Bay but sits in a different province. Around 200 species of fish, 500 species of mollusc, 400 species of arthropod (prawns, crabs) and numerous hard and soft corals live in the waters here, while larger marine animals in the area include seals and three species of dolphin.

Like Halong Bay, Lan Ha is best explored on an overnight boat tour, which usually includes a stop at a beach and the chance to get out on the water to kayak. However, tours can also include activities like hiking and rock climbing, as well as homestays on some of the islands.

How to book a tour of Lan Ha Bay

Tours can be arranged from both nearby Cat Ba Island and Hanoi. Tours generally tend to come as a one day, two days/one night or three days/two nights package and the bay's admission fee is normally incorporated into the price. Locally-owned Cat Ba Ventures on Cat Ba Island is just one outfit running overnight boat trips around the bay (overnight boat tour per person from approx US$136).