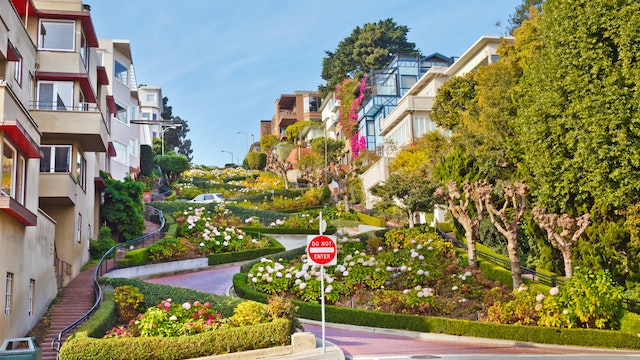 You’ve seen the eight switchbacks of Lombard St's 900 block in a thousand photographs. The tourist board has dubbed it ‘the world’s crookedest street,’ which is factually incorrect: Vermont St in Potrero Hill deserves that award, but Lombard is much more scenic, with its red-brick pavement and lovingly tended flowerbeds. It wasn’t always so bent; before the arrival of the car it plunged straight down the hill.

Today, joyriding on this residential street is strictly forbidden. A police clampdown on renegade skaters means that the Lombard St thrills featured in the Tony Hawk’s Pro Skater video game will remain strictly virtual, at least until the cops get slack. Every Easter Sunday in the early 2000s, adults arrived at the crest of Lombard St toting plastic toy tricycles for the annual Bring Your Own Big Wheel race. After vehement complaints from some residents, art-prankster organizers moved their toy joyride to – where else? – Vermont St. Check http://bringyourownbigwheel.com for details.