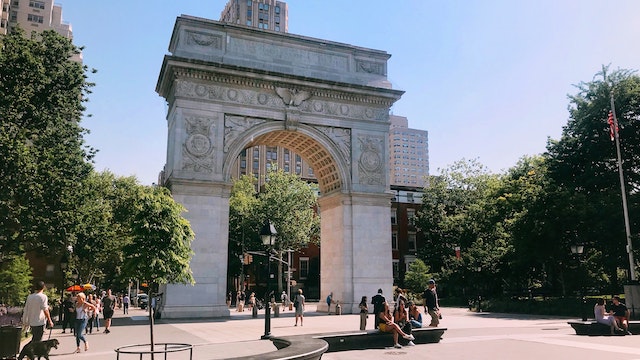 This former potter’s field and square for public executions is now the unofficial town square of Greenwich Village, hosting lounging NYU students, tuba-playing street performers, socialising canines, fearless squirrels, speed-chess pros, and barefoot children who splash about in the fountain on warm days. Locals have resisted changes to the shape and uses of the park, and its layout has remained largely the same since the 1800s. Check out the Washington Square Park Conservancy (www.washingtonsquareparkconservancy.org) for news and events.

Surrounded by perfectly manicured Greek Revival town houses and a grab bag of modern architecture (all owned by NYU), Washington Square Park is an enticing green space – especially as you are welcomed by the iconic Stanford White Arch on the north side of the green. The arch, colloquially known as the Washington Square Arch, dominates the park with its 73ft of gleaming white Tuckahoe marble. Originally designed in wood to celebrate the centennial of George Washington’s inauguration in 1889, it proved so popular that it was replaced with a stone version six years later and adorned with statues of the general in war and peace. In 1916 artist Marcel Duchamp famously climbed to the top of the arch by its internal stairway and declared the park the ‘Free and Independent Republic of Washington Square.’ Its reputation as a bohemian agora sealed by beatniks and folkies in the '40s, '50s and '60s, Washington Square Park has long provided a stage for political activity and has been the scene of many protests and rallies.