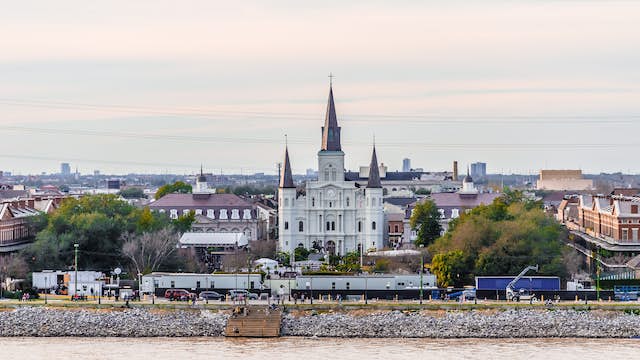 One of the best examples of French architecture in the country, this triple-spired 18th-century cathedral is dedicated to Louis IX, the French king sainted in 1297. The St Louis Cathedral, located in the heart of New Orleans' French Quarter overlooks Jackson Square. It's an attractive bit of Gallic heritage in the heart of an American city.

Throughout the year, St Louis Cathedral hosts events that are at the core of New Orleans’ Catholic community. If you’re in town during any of the following holidays, try to attend. Christmas services are packed, including a 5 pm vigil on December 24 and midnight Mass on December 25 (doors open at 11:15 pm). On Palm Sunday (the Sunday before Easter), the transfixing Blessing of the Palms ceremony begins at 10:50 am. Come on Ash Wednesday, the day after Mardi Gras; ashes, a symbol of mourning and penitence, are distributed at 12:05 p.m. during mass and in St. Anthony Garden from 2-3 pm.

In 1722, a hurricane destroyed the first of three churches built here by the St Louis Parish. The second was destroyed in the Great New Orleans Fire. Architect Don Gilberto Guillemard dedicated the present cathedral on Christmas Eve in 1794. Pope Paul VI awarded it the rank of minor basilica in 1964.

Besides hosting African American, white and Creole congregants, St Louis has attracted those who, in the best New Orleanian tradition, mix their influences. Voodoo queen Marie Laveau worshiped here during the height of her prominence in the mid-19th century.

Head to Spitfire Coffee, on St Peter, for a jolt of joe that will keep you awake for the rest of the day. Or, duck over to Pirate's Alley Cafe, which is steps away from the cathedral and a nice spot for a beer or, if you're feeling adventurous, a sip of the "Green Fairy."

St Louis is a working cathedral, so be respectful when you visit. Loud noises and obtrusive picture-taking are frowned upon.

Get there early if you want to attend a ceremony on a major holiday.