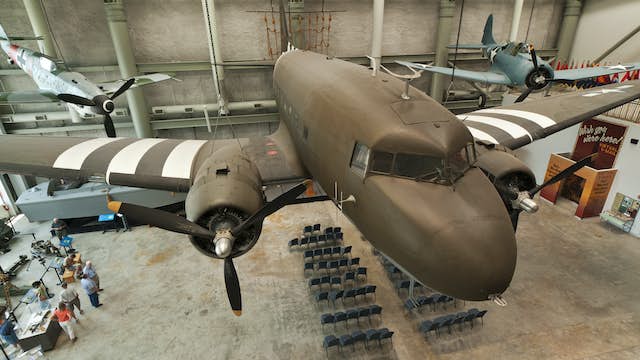 One of New Orleans’ most distinctive tourism attractions has nothing to do with food, music, or having a good time. Rather, it is a museum dedicated to the contributions of the USA to the Allied cause in the largest armed conflict in history. The National World War II Museum, which takes up several blocks of the Warehouse District, was deemed the nation’s official World War II museum by an act of Congress in 2003. Enormous pavilions are filled with refurbished planes, tanks, interactive displays, cases of weapons, uniforms, and medals, movies, newsreels, and immersive recreations of bunkers, ship bridges, forests, and jungles. You’ll want to give yourself at least half a day to explore the whole campus.

The Campaigns of Courage

The museum is divided into several pavilions, themselves subdivided into different sections, but the main draw for most visitors are the two Campaigns of Courage exhibits, which focus on the European and Pacific theaters of the war - respectively, the ‘Road to Berlin’ and the ‘Road to Tokyo.’ The museum’s focus is aimed at American involvement in the war, and while some exhibition space discusses other Allied nations, the contributions of these countries is cast as strictly supporting the main American narrative.

Highlights from the Road to Berlin include a recreation of the Tunisian desert, which includes sand, gravel, an actual 1943 jeep and a 105mm Howitzer. In another room you’ll enter the wintry Ardennes forest, the backdrop for an exhibit on the Battle of the Bulge, which precedes the bombed out cityscapes of Cologne and Hamburg during the final push into Nazi Germany.

The Road to Tokyo includes a shark-faced P-40 Warhawk aircraft, a recreation of the bridge of the USS Enterprise, where visitors can learn about the naval combat and island hopping of the Pacific campaign, and a recreated jungle of towering palms meant to evoke the battlefields of Guadalcanal.

The Arsenal of Democracy

This section of the museum is devoted to the war outside of the battlefields. ‘Gathering Storm’ tells the saga of the geopolitical tensions that preceded the war, and explains how fascism was the ideological engine of the Axis cause. ‘A House Divided’ goes into the deep domestic divisions that split Americans between isolationists and interventionists. Other exhibitions explore the massive mobilization of resources that was required to fight a war on two fronts on opposite sides of the world.  ‘United but Unequal’ is a particularly powerful gallery that explores the racial tensions on the American homefront; even while fighting ethnic nationalists, the American military was segregated, and Japanese American civilians were rounded up into internment camps.

The D-Day Invasion & Bayou to Battlefield

Before it was the National World War II Museum, this was the National D-Day Museum. The core of the former museum’s holdings are now displayed in this space, dedicated to the Jun 6, 1944 landings that kicked off the liberation of France. Within the D-Day galleries visitors can find parts of the Nazi ‘Atlantic Wall’, sand from landing beaches, and reams of smaller artifacts sourced from in and around Normandy.

So why was this museum originally the D-Day museum? And why is the National World War II Museum located in New Orleans? These two questions require one answer: New Orleanian Andrew Jackson Higgins and Higgins industries. Higgins was a boatbuilder by trade, and worked on shallow draft vessels for use in local wetlands. He was able to modify these designs into the Landing Craft Vehicle Personnel (LCPV), the iconic landing boat used at D-Day landing and countless other operations. A restored LCPV is located on the museum grounds.

Beyond All Boundaries & Final Mission

Visitors will often begin their visit to the museum by watching this 45-minute movie experience, narrated by Tom Hanks and replete with the sort immersion the museum prides itself on: falling ‘snow’, seats that shudder under explosions, etc. In the same interactive vein is Final Mission. This exhibit recreates the final mission of the USS Tang, a submarine that was sunk by one of its own torpedoes following attacks on Japanese shipping lanes. Final Mission takes place in the US Freedom Pavilion, which is itself filled with resorted aircraft, tanks, and uniforms from the war.