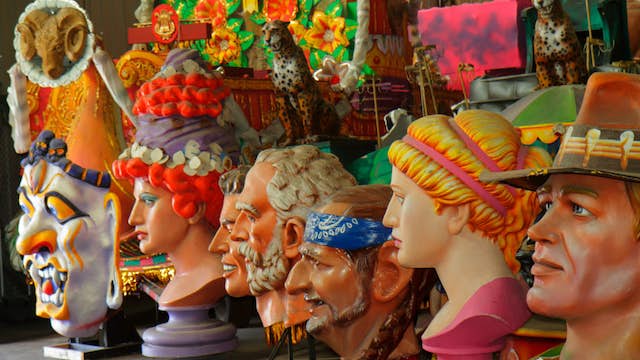 There is no holiday more quintessentially New Orleans than Mardi Gras, the culmination of a two and a half week window of revelry known as carnival. And there are few images more closely tied to Mardi Gras in the public imagination than enormous floats packed with masked riders trundling through the live oak-shaded streets of the city. For decades, the lead designers on those floats have belonged to the Kern family, led by their patriarch, the late Blaine Kern. Today, a massive (300,000 square foot) warehouse complex known as Mardi Gras World serves as a permanent home to some of the Kerns’ most beguiling creations, all a testament to the sheer wonder that is unleashed during Mardi Gras.

Behind the scenes in a world of dreams

The Kern family dominates the float-building business in New Orleans and operates Kern Studios, an entertainment design studio that, along with floats, has also produced installations for Walt Disney and the National Football League. But it was Mardi Gras floats that put the Kerns on the map, and it is the Mardi Gras floats that take center stage at Mardi Gras World (imagine that). The Kerns may have created floats for other institutions, but these often lack the whimsy that is so commonplace on the streets of New Orleans during carnival season.

The main draw of Mardi Gras World is the ‘float den’, the space where the Kern team creates its floats, which change year by year based on the thematic needs of the city’s ‘krewes’. In New Orleans (and a few other parts of the Gulf South that celebrate a Catholic carnival), krewes are the local parading societies. You could say the krewes march during carnival, but the preferred term of the trade is ‘roll’ or ‘ride’, verbs that owe their existence to enormous floats that can accommodate dozens of krewe members.

Each float must not only hold the krewe riders, but bags of ‘throws,’ which can range from cheap plastic beads to stuffed animals - it’s a time-honored New Orleans tradition to stand on the sidewalk on a chilly February evening and scream your head off for the chance of catching a throw off a Mardi Gras float.

A visit here consists of a self-guided tour, which usually takes around an hour. Kern floats are both enormous and eye-catching, a blend of fantastical design and a size footprint that can almost feel intimidating. There is a definite through the looking glass vibe in the float den, as visitors wander around a warehouse stuffed with sculpted giant fish, dragons, fairies, chimeras, neon flowers, pastel butterflies, and depending on the year, political or pop culture icons.

When French-Canadian explorer Jean Baptiste Le Moyne Sieur de Bienville arrived at a plot of ground 60 miles south of New Orleans in 1699 on the eve of Mardi Gras, he named the location “Pointe du Mardi Gras”. The holiday and the city have been inextricable ever since.

In early New Orleans Mardi Gras parades were eclipsed by grand balls, but grand processions became more of the norm as the holiday evolved from the 1830s to the end of the 19th century. Still, well into the 20th century, Mardi Gras floats were basically wagons hitched to mules. This all changed in 1932 when sign-painter Roy Kern and his son, Blaine, began building floats. Blaine Kern founded the studio that bears his family name in 1947, and using his creative talents and sheer force of personality, began to dominate the local float building scene.

Blaine Kern learned many of his float-making techniques in Europe. He grafted the colorful float art of that continent with an American penchant for supersizing and motorized processions, and in the process irrevocably changed the entire aesthetic of Mardi Gras. It was Kern’s influence and artistic style that paved the way for the giant ‘tandem floats’, flashy lighting, and even animatronics that are now the norm during many carnival parades.

Indeed, Kern’s relentless self-promotion included selling floats to smaller and suburban krewes, the end result being a carnival season that showcases, compared to what came before, a more diverse slice of greater New Orleans. While Mardi Gras World has been around as a tourism attraction since 1984, it has occupied its current space by the convention center since 2008. Blaine Kern himself passed in 2020, although the business remains controlled by his family.

Tickets, parking, & getting there