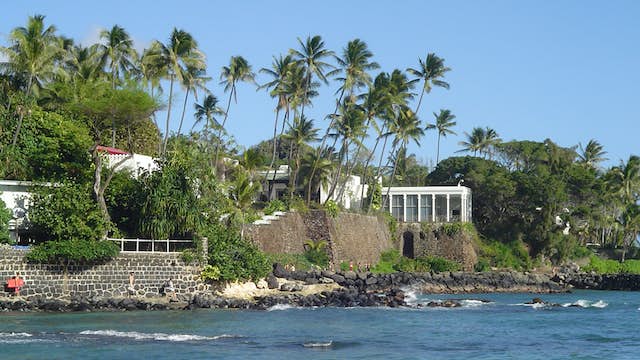 In the shadow of Diamond Head, the former mansion of billionaire tobacco heiress Doris Duke is a sight to behold for art-lovers and celebrity hounds. Shangri La is a treasure house of antique Islamic art, including ceramic-tile mosaics, carved wooden screens, silk tapestries and glazed paintings, all embraced by meditative gardens filled with fountains and offering stunning ocean vistas.

Who was Doris Duke?

Doris Duke (1912–1993) inherited an immense fortune after her father died in 1925, when she was just 12 years old. She was once nicknamed "the richest little girl in the world", and this money granted her freedom to do as she pleased. Among other things, that meant two very public divorces and a scandalous marriage to an international playboy. While living in Hawaii, she became the first white woman to surf competitively and, naturally, she learned from the best: Olympic gold medalist Duke Kahanamoku and his brothers.

Doris had a lifelong passion for Islamic art and architecture, inspired by a visit to the Taj Mahal during her honeymoon at the age of 23. During that same honeymoon in 1935, she stopped at Oʻahu, fell in love with the island and decided to build Shangri La, her seasonal residence, on Black Point in the shadow of Diamond Head.

For over 60 years Duke traveled the globe from Indonesia to Istanbul, collecting priceless Islamic art objects. Duke appreciated the spirit more than the grand scale of the world wonders she had seen, and she made Shangri La into an intimate sanctuary rather than an ostentatious mansion.

Curious to know more? Watch the HBO movie Bernard and Doris (2006), starring Susan Sarandon as Doris Duke and Ralph Fiennes as her butler Bernard Lafferty. Upon her death, Doris appointed her butler as the sole executor of her fortune. She directed that it to be used to further her philanthropic projects, including supporting the arts and against cruelty to children and animals.

One of the true beauties of the place is the way it harmonizes with the natural environment. Finely crafted interiors open to embrace gardens and the ocean, and one glass wall of the living room looks out at Diamond Head. Throughout the estate, courtyard fountains spritz. Duke’s extensive collection of Islamic art includes vivid gemstone-studded enamels, glazed ceramic paintings and silk suzanis (intricate needlework tapestries). Art often blends with architecture to represent a theme or region, as in the Damascus Room, the restored interior of an 18th-century Syrian merchant’s house.

Tours of Shangri La are on hold in 2021, but are expected to resume later in the year. The museum can only be visited on a guided tour departing from downtown’s Honolulu Museum of Art where you’ll travel as a group by minibus to the estate, watching a brief documentary on Doris Duke en route. Tours last 90 minutes. Tickets must be reserved online in advance, and tours often sell out weeks ahead of time. Children under eight are not allowed.