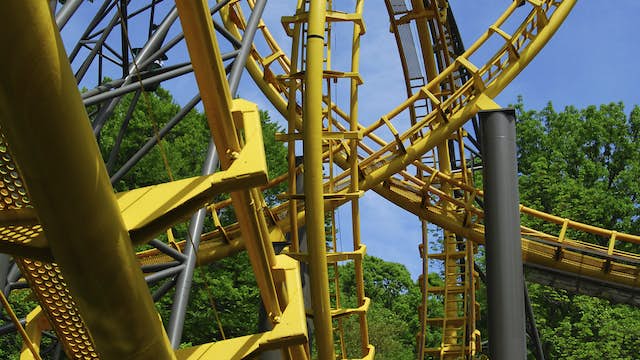 This theme park has 10 loosely named African zones, which flow together without much fuss. The entire park is walkable. Admission includes three types of fun: epic roller coasters and rides, animal encounters, and various shows, performances and entertainment. All are spread throughout the park, so successful days require some planning: check show schedules before arriving and plan what rides and animals to visit around the shows. Coaster lines only get longer as the day goes on. Parking costs $25.

Egypt Home to a unique spin coaster called Cobra's Curse featuring a 70ft vertical lift and an encounter with an 80ft snake. There's also Montu, one of the tallest and longest inverted roller coasters in the world.

Pantopia The reimagined Pantopia drips with elaborate jewels and features animal- and travel-themed restaurants, entertainment, shopping, an indoor theater, and rides, of course. At its center is Falcon's Fury, a 335ft-high freestanding drop tower (America's tallest) that plunges riders earthward at 60mph.

Serengeti Plain This 65-acre habitat mimics the African plains, with hundreds of free-roaming animals including reticulated giraffes, rhinos and wildebeests. You can view it from the Serengeti Railway train ride, a Skyride gondola, various walkways or the Serengeti Safari Tour (from $29 to $44 per person), which lets you out of the truck to feed giraffes.

Edge of Africa A newer region offering a walking safari with sightings of hippopotamuses, lions, lemurs, meerkats and crocodiles in an apparently abandoned African fishing village. Also here is the ride Cheetah Hunt, a low-to-the-ground scream-fest meant to mimic a cheetah's acceleration.

Morocco You'll find Gwazi, a huge but traditional wooden coaster, along with monkey and ape encounters and the Moroccan Palace Theater, which puts on Iceploration, the park's most impressive ice show, combining world-class skaters, larger-than-life puppets, original music and animal stars. It's close to the other main animal exhibits in Egypt and Nairobi.

Nairobi Devoted mostly to animals, Nairobi features an elephant interaction area and a flamingo petting station at Animal Connections. It's also the location of the Animal Care Center, which offers educational behind-the-scenes tours of vets at work with some of the park's 12,000 animals.

Congo The Kumba roller coaster is a long-standing favorite. It features three gulp-inducing loops and a 360-degree spiral. Recover on the Congo River Rapids, a water ride.

Jungala Designed for younger kids, Jungala has a fantastic climbing structure, a splash area and a zipline ride, as well as encounters with tigers and orangutans.

Stanleyville Another all-star coaster, SheiKra is North America's first dive coaster, which plunges straight down and even goes underground.

Safari of Fun & Bird Gardens The Sesame Street–themed Safari of Fun has awesome fenced-in play and climbing structures and splash zones that will keep kids busy for hours. Don't miss the Elmo and Friends show; reserve ahead to dine with costumed characters. Adjacent Bird Gardens (the seed of the modern park) has the quintessential flock of flamingos and a walk-in aviary.