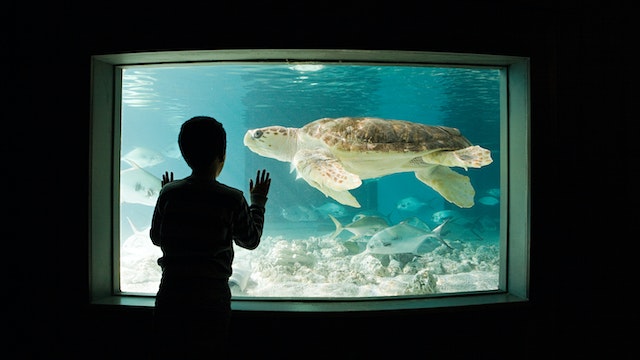 Teeming with sea creatures of all sizes, shapes and colors, this giant fishbowl is the centerpiece of downtown Boston's waterfront. There are countless exhibits here exploring the lives and habitats of underwater oddities, as well as penguins and marine mammals. Here are some of the highlights.

The main attraction at the aquarium is the four-story Giant Ocean Tank, which swirls with thousands of tropical creatures great and small, including turtles, sharks and eels. The vast tank holds 200,000 gallons of water, and is so huge that the rest of the aquarium was built around it.

Harbor seals hang out in an observation tank near the aquarium entrance, while the open-air Marine Mammal Center is home to northern fur seals and California sea lions. Visitors can watch training sessions where the pinnipeds show off their intelligence and athleticism. Note that some animal rights groups make a strong case that marine mammals should not be kept in captivity, no matter how classy their quarters.

Most of the aquarium's 1st floor is dedicated to an enormous penguin colony, home to more than 60 birds representing two different species: rockhoppers and African (or jackass) penguins.

The Shark and Ray Touch Tank recreates a mangrove swamp full of Atlantic rays, cownose rays and five species of sharks. Currently it's open for viewing only (no touching), but you can still learn about the importance of protecting ocean habitats and see plenty of activity through the crystal-clear water.

Upstairs, six different tanks showcase the flora and fauna of the Amazon rain forest, one of the most diverse habitats in the world. Look out for poison dart frogs, piranhas and anacondas.

Ever wanted to see a giant Pacific octopus, the largest of its species? This is where you could spot them, stretching their tentacles among other Pacific ocean creatures, including sea cucumbers, hermit crabs, and many different types of fish.

The Simons Theatre features short films with aquatic themes. Follow a pod of humpback whales on their migration, or get to know more about the incredible hunting skills of great white sharks. Closed captioning devices are available for all films.

The whale-watching cruises run by the aquarium in partnership with Boston Harbor Cruises (March to November) head out to Stellwagen Bank where whale sightings are guaranteed. You may also see sea birds, dolphins and other marine life.

Timed-tickets to the aquarium should be bought online in advance. There is an additional charge for screenings at the Simons Theatre. Children under 3 may visit for free. Wheelchair-users may enter the aquarium free of charge. Whale-watching tickets should be booked through Boston Harbor Cruises, and can be combined with entry to the aquarium at a small discount.